Even more things I don't understand, based on the news yesterday that 5 buckeyes are ineligible for five games, but Tressel can pick and choose when it's best for the team to impose discipline. 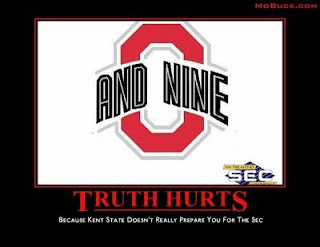 For you parents out there, have you ever even considered waiting until the following Monday to bend your kid over your knee when you caught them in a slap fight with the younger sister? Would you wait until after prom to impose restrictions if you caught your teenager playing tongue hockey with the boyfriend with a six-pack at their feet, five of which were empty?


I know I'm old and set in my ways. But some more things just continue to baffle me:
In related news, Coach Richt has amended his Wish List to include sweater vests and a Slive SECopoly get outta jail free card...otherwise known as a Reverend Newton.

I have one client that pays me by submitting a bill on their website that will only work with Internet Explorer. I am all Mac and won't install IE. It is not that frequent that I need it, so I go to a public computer (or borrow someone's) to do it, but there you go. Sometimes you just don't have a choice.

Merry Christmas, Bernie, thanks for a great year of posting, and here is hoping there will be great Bulldog news in 2011.

I guess we're both old, but at least we're hip enough t recognize an outdated browser when we see one (crash...again...and again).

Merry Christmas to you as well Ollllddude. 2011 will be the year of the Dawg!