I probably should’ve posted this earlier in the week to help give you a head start, but let’s face it…you still wouldn’t be doing anything about it until now anyway. So here’s some ideas for that special Dawg in your heart.
And if all else fails…buy her a subscription to BerniesDawgBlawg  and take her for a coupla chili dogs at the Varsity Sunday night. You’ll thank hate me later.

Email ThisBlogThis!Share to TwitterShare to FacebookShare to Pinterest
Dawg Tags: BAD photo shops, idiots not named Terence, too much tailgate

Here’s a recap of yesterday’s episode:
ThursdaysRTrivial is coming up after this PSA: You can piss away your dreams, but Tweetdeck don't flush.
ThursdaysRTrivial ep 32 "Spring Awakenings" The weather outside is still frightful, but ThursdaysRTrivial is always delightful. REPLY back your answer for a chance at a fabulous prize. According to Dawg historian and coaching legend Dan Magill, what sport is the oldest varsity sport on campus?
Winning takes a lot of effort, but giving it 110% doesn’t always 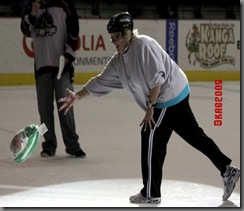 guarantee W’s. Yesterday @BPMackie gave it his all…or at least loaded up a seven shooter full of bullets and took wild aim. Here’s his laundry list of educated guesses: equestrian, basketball, tennis, wrasslin’, baseball, bobsledding, and turkey bowlin’. And even though Mackie eventually stumbled upon the correct tweet, it was only good enough for a stand up double cuz @allyugadawg fished her phone out of the bowl just in time to provide the correct answer – Baseball!! Go Diamond Dawgs!!!
I trust Ally will enjoy this authentic Claude Derrick Philadelphia Athletics jersey from the 1912 World Series. It’s not a new crackberry, but should look nice from the stands at Foley this spring. Mackie meanwhile gets a stolen copy of E. Merton Coulter’s notes, a treasure for any UGA historian (or just a guy needing some light reading while at the office. But please secure your phone before coppin’ a squat…..).
In case you’d like to get in on the act too Reader….Who were the pitcher/catcher tandem on that first UGA baseball team that were also brothers? Hint…the pitcher introduced the curve ball to the South. Winning comment gets a free shout-out in Monday’s Meatloaf. Or a coupon for a free medium fries at Burger King, expiration date yesterday at noon.
And don’t forget to follow me on Twitter. Maybe you can slow down the Dan Magill wannabe in Ally in episode 33.
Hunker'd Down by Bernie at 9:31 AM 3 comments:

I read In Dawgged Pursuit a few weeks ago and was eager to post something on it, but couldn't find the interview on the actual website. If you're a USTA member in the Atlanta area, you probably have already had the pleasure of reading it in print. I doubt if it made the other regional issues of Inside Tennis, but after reading it a second time...I sure hope so.


Manny Diaz is not just a great coach and leader, but a true ambassador for the University of Georgia. I don't know how many tennis fans I serve here, but all Dawg fans can easily become Diaz fans. I've included some excerpts from the interview below, but you should check it out in its entirety.


InsideTennis: The history and fanfare of Wimbledon is great. Roland Garros has Paris, and the U.S. Open is an event like no other. But there’s nothing quite like an NCAA team final — six matches going on at the same time, fans yelling. What makes the atmosphere so special? 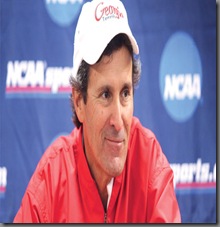 Manny Diaz: You’ve got kids playing with such heart, such enthusiasm. You can pick a match to watch from the six that are going on. Three doubles matches. You see great variety. It’s a little more “rah-rah.” It’s a zoo. It’s a jungle. It’s that kind of passion for the game that you see in college matches.


IT: For those who haven’t experienced May Madness on the Georgia campus before, how would you describe it?
MD: Our crowds were really, really rowdy when we started hosting the NCAAs. We hosted them now for 25, 27 years in the past 30 years. In the beginning, our crowd was basically a football crowd — the Deep South in the early ‘70s. But the more we hosted it, the more our fans became tennis fans, the more they became educated from just wild, football fans to being more informed. While our fans are right now many in numbers — we’ve got over 6,000 fans out there for the NCAA Championships — our fans are much more educated and tennis savvy than they used to be.


If you’ve never been to an NCAA tennis match, check one out this spring at Dan Magill Tennis Complex. It’s nothing like what you see on television as you watch Wimbledon or the US Open. The atmosphere is electric, an organized rowdiness that is closer to Saturdays in the fall than it is a fortnight in London.
And this interview with Coach Diaz really paints the picture. The excerpt above barely scratches the surface Reader. Diaz goes on to make any Dawg fan proud with the way he talks about Athens and the University of Georgia. He also analyzes John Isner’s rise in the ATP rankings…and gives Inside Tennis his all-time Georgia lineup.
Great read.
Some related links:
Hunker'd Down by Bernie at 5:17 AM 4 comments: 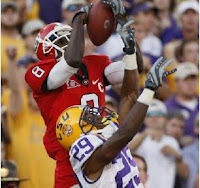 The spurned by the state’s top wideout talk has slipped to a dull roar. Thankfully. And while it is now perfectly clear that we’d much rather have Baccari Rambo than one Da’Rick Rogers, the reality must still be faced squarely in the mirror.

Who’s lining up with AJ this fall?

Sure, many writers will spill ink over the QB race to succeed Joe Cox. But really, this is Aaron Murray’s to lose. And of course we already know who runs this state. So the other offensive skill position needs to be addressed. It’d be nice for one of these guys to step up in what should be AJs final season. We lose Michael Moore who produced a modest 25 catches for 249 yards in ‘09, but was second on the team with 5 TDs. However, we get back Kris Durham who is a natural fit with his size in the slot position that Moore often occupied.

Here’s a look at the returning names along with their ‘09 numbers:

With all due respect to Tavarres King who had some big grabs last season, the numbers really drop off after #8. Troupe has had moments of brilliance that hiccup within lags of non-playing time. Wooten’s skillset may be unquestioned, but his size will limit his opportunities down close to the goalline. 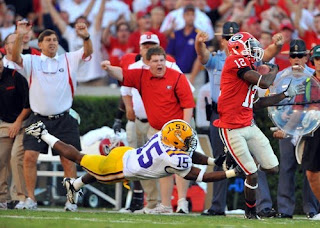 And while many fans will focus their attention on the broad shoulders of Marlon Brown, the answer may also be found at the TE position. As Paschall wrote, Georgia’s tight ends are poised to complement a receiving corps that even Coach Richt admits is not as deep as he would like.

Depth is definitely an issue at receiver. I would say we don’t have, at this moment, a good number that I feel comfortable having. During the season, you’re probably going to play around six or seven, and that’s what we have right now, so everybody’s going to get their share.

From reading that quote it might be easy to surmise that Logan Gray will be counted on to provide some extra depth. Yet truly, it’s unlikely at this point that even Coach Ball knows how well the athletic quarterback will fill into the role of a pass catching playmaker. So it’s clear that someone will need to step up. A dependable deep threat and athletic ball hog needs to line up on the field opposite AJ Green for a reasonable amount of fear to strike the hearts of SEC secondaries. Preferably two deep threats and ball hogs. Maybe three...I'm greedy.

I would say at this point, #7 may be the only other answer we feel completely comfortable in giving. But I bet by summer’s end we have another. What say you? 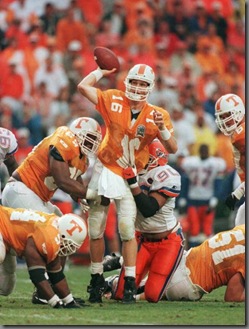 So another season of gridiron battles came to a close last night. Congrats to the New Orleans Saints on their great achievement. Sure, winning the Super Bowl is awesome. It’s their first ever. So when everyone in the City of Saints finally sobers up, sometime around Cinco de Mayo…well then I guess they will rebuild the city once again.

But, the greatest achievement for the Saints was proving to the rest of the world that one dude named Peyton Manning is actually a human with faults. I mean, my God…he chose Rocky Flop as his institution for higher learning not so long ago. Since leaving Knutsville, the guy’s done nothing but walk on NFL waters. And evidently lost the battle of the hairline.

But I digress. Look, I know Peyton is the nicest guy to ever wear urranjah and you can’t deny that he has a beautiful name. But I’ve grown sick of the greatest eveh and the all he does is win close games talk. The Saints proved he can throw as many TD passes to opponents’ jerseys as his own.

The good news for Peyton is that once he’s old enough, he can always perform at halftime to help make ends meet.

That’s about all for today folk(s). Now go give Monday a swift kick in the (pants).