Time to Man Up

.
The fatter they are, the harder they fall. And Bama’s fat. They have a colossal sense of entitlement and their recent success under darlin’ Nicky has only fueled it into a blaze for all Pachyderm athletics.

Well, not tonight.  Hope to see you at Stegeman. Click here to do your part in making this a sellout. Then we can watch some more of this -
Personally I like the quickly covered smirk by Coach Fox after the highlight as much as the dunk itself.

For more awesomeness, here’s Connor Nolte’s game day trick shot.
Hunker'd Down by Bernie at 9:29 AM No comments:

Here’s the recap of episode 33:
ThursdaysRTrivial is coming up after this PSA: Too much Grecian Formula can over Costasize your scalp. Use with Caution. 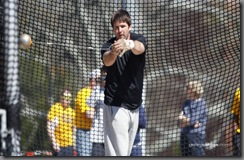 ThursdaysRTrivial episode 33 “Winter Olympics Dawggy Style”. It’s time again for the Twitter Game Show that puts as much pep in your step as it does bob in your sled. REPLY back your answer for a chance at a fabulous prize. What three time NCAA nat’l champion will become the first Dawg to compete in both the summer and the winter Olympics on Saturday?
I expect by this time next year, we will see a lot more bobsleds on the University of Georgia campus. Mopeds are so 2009. And once Andras Haklits helps the Croatian bobsledders to the podium in Vancouver, this mode of transportation will take off like a North-South bus through a cloud of smoke on Sanford Bridge. You may remember that Haklits could really throw a hammer on campus nearly a decade ago. He’s also competed in Sydney, Athens and Berlin for the Summer games (that’s Athens, Greece…ya dummy). Word is he looks pretty good in a parka as well now that he’s in Vancouver. 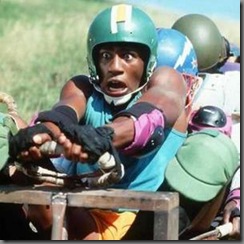 Meanwhile for being first to tweet in, @TNRLM will be enjoying a special 17th year edition of Cool Runnings, undoubtedly the best bobsledding movie ever to grace the silver screen. The copy comes complete with Sanka Coffie’s autograph and a coupon to John Candy’s (aka Irv Blitzer) favorite hot dog stand. Sorry, you’ll have to provide your own popcorn.
Also tweeting in was @alanashley. He gets one of those cool beanie caps the Americans were wearing during the opening ceremonies. Should look good as he travels by bobsled to and from Stegeman. Speaking of which, check out these guys’ websites: Alan’s Assessments and The Non-sensical Ravings of a Lunatic Mind.
And if you’d like to get in on the act too Reader….finish this quote:


Free shout out in the Meatloaf if you get it right. Have a great weekend!
Hunker'd Down by Bernie at 9:47 AM No comments:

Is Coach Mark Fox our Jukebox Hero? If you wanna be a naysayer you’ll dismiss this thought too eagerly, you’ll point to the record and all the last minute losses. You’ll also raise your voice when you mention the brain fart to Wofford at home. And certainly half way through his first season, it’s not a record that sparkles and shines. Fox's charges are prone to turnovers in bunches and have made a habit of faltering down the stretch.

Yeh, I hear ya. Coach Fox's 11 wins against 12 losses generally adds up to an early vacation in March. But there are stars in his eyes, you know? While at Nevada, Coach Fox compiled a 123-43 record with three straight NCAA Tourney appearances. He was the WAC Coach of the Year three times. Prior to his first head coaching gig, he served under Nevada head coach Trent Johnson as his associate head coach. 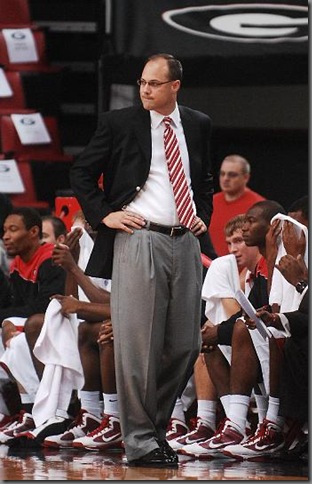 He had a good thing going in Reno. Then he put his ear to the wall…and heard a distant scream.

And while I'm not saying the Georgia Hoops program is a beat up six string in a second hand store, it's not exactly a sold-out show either. For years the men's basketball team has toiled along with a smattering of highlights. When a good coach came along to rescue us from obscurity, he either bolted for a sea of blue or left the program in shambles.

All of this while sitting in a fertile recruiting ground where the right coach could simply cherry pick his starting lineup and its backups without the need for hemorrhaging frequent flyer miles. We heard the roar of the crowd during the Tubby and Harrick tenures, but in between the audience has mostly stayed away or sat on their hands.

I can remember camping out for tickets back in 1990 on the eve of an SEC showdown with LSU of epic proportions. I contend to this day that it was the biggest athletic victory on campus to date. Sure, the football program has a laundry list of big wins and the Gymnastics program has gone through stiff competition like a chainsaw through cordwood. Plus, how many tennis matches have gone our way at Magill Tennis Complex? Too many to count.

However, those programs are set up for success. The men’s hoops has difficult chords, key changes and complicated bridges to negotiate through. No offense to Coach Richt and the success he has enjoyed. But he, Yoculan and Diaz were given well-tuned Gibsons complete with amps and a plush recording studio. Every basketball coach dating back to Coach Durham has been asked to produce hit records from a garage using their uncle’s old Peavey. Jirsa didn’t know a fret from a fuse box and by the time Felton came to town the drummer had left and the bass player was in rehab. So everyone just sat there…waiting. Just like Felton’s offense, the program once again became stagnant. Boring.

But Fox…well, he’s got just one guitar….slung way down low. The first 23 games may not have produced the record we would like to see, but it's given us a taste. He’s got us rockin’. The argument for Fox being SEC Coach of the Year may not make the regional playlist this season, but it's a safe bet it will be a hit in the near future. The highlights have been glamorous. Despite the critics, the program’s gaining some attention. Young rockers are taking notice. They’ve got stars in their eyes too.

Furthermore, the seats are selling. Slowly but surely, Stegeman will be a live show again. Once a forgotten event, the mens hoops will have adventurous souls gathering outside. It’ll be a heavy downpour. But they’ll gather just to put their ear to the walls and hear the roar of the crowds.

And that one guitar, made his whole life change. I may just be drinking the Kool-Aid again, but I think it's gonna change ours too.


Addendum:
Big game against Tennessee on the hardwood tonight. I’m sure those HillBillys remember getting their ass kicked. Tune in on SECtv tonight at 8pm. If you’re like me though, you may need ESPN360 to watch.

Also, another big game in Athens Saturday. Bama comes to town with their first year coach Anthony Grant. I’m sure you remember him. So you can get your tickets here.

.
...Tomorrow May Never Come.
- Dutch Harbor Proverb
I rarely post non-Dawg stuff. But Deadliest Catch is my favorite show and the Cornelia Marie has always been my favorite boat. I've seen a bunch of videos done as a tribute to Phil Harris after his death last week. This is the way I'll remember him -
Almost always on top of the crab. Riding his crew hard to reel in pots as full as they could possibly be.
RIP Cap'n Phil. Double Duck Farts on the House.

Hunker'd Down by Bernie at 4:23 AM No comments:

Monday’s Meatloaf – Giving Credit When Past Due

There are a number of things that a blogger uses to get by. For me, Old Crow bourbon whiskey is not just fuel for the soul but also a common source for inspiration. 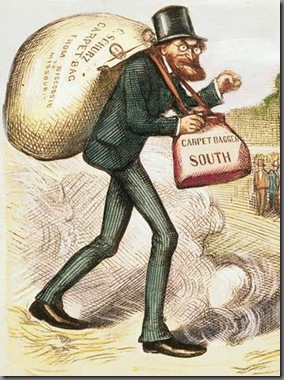 But there’s other times when my keyboard and I just need some info, some honest coverage of the school I spent four five years at obtaining a degree in learning to drink. Most of you already know who the best Georgia beat writer is, but if not I can tell you the best, most accurate and complete coverage comes from a person Lewis Grizzard taught me to distrust.

David Hale is a yankee. Although I can count the times I’ve met him on one finger, I’d be willing to bet he has no grits in his pantry, probably eats his biscuits from a can and drinks his tea without sugar.

But….he’s not a damn yankee. He’s a damn good yankee. And while on vacay he got hisself recognized for being damn good at what he does. No word if this award comes with a year’s supply of Visine though. However, ultimately this’ll mean he does get some high fallootin’ job at Fox or even the mutha, but regardless it’s past due.

As I waited on official word that Willie Martinez would not be our defensive coordinator, there’s one guy who’s tweet made it official. And one day as I await official word that Michael Adams has indeed bagged his last carpet in Athens…I hope the news comes from one David Hale.

Congrats man! I hope you take the time to enjoy one of those frozen pre-packaged Philly Cheese steaks from the Golden Pantry. Not exactly PhilDELFya…but a treat nonetheless.

Then again, what were the odds on our Bulldog Blogger winning the bloodshot eyeball?

And I would be remiss if I did not spend a few lines honoring the men who have given their service to our country through the Oval Office. They haven’t all been perfect, and many have miserably failed. But they all became grayer around the temple and fatter around the waistline as a result of sitting in the big chair. 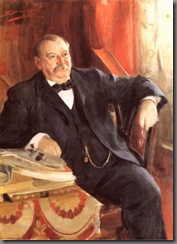 Last year I honored Teddy Roosevelt, this year I’m gonna work on Grover Cleveland. While it’s true that Cleveland was the only big guy to serve two terms that weren’t consecutive, it’s not true that he once ate his way out of Buffalo NY. The “mugwumps” sent a horse and buggy for him. On the back of it read: Railroads are for sissies…and jort’d men. It’s true. Google it.

In the end, all the buffalo wings in Jersey weren’t enough to get Cleveland invited back to his own party. He died just under four bills; even the Veto President couldn’t say no to chocolate milkshakes and double cheeseburgers.

And if you’ve stuck through all this to the end here Reader, chances are you won’t veto this plate. Better grab an extra napkin. You got a little on your chin there.

Bernie
Hunker'd Down by Bernie at 8:54 AM No comments: