As I'm sure you've heard, Zack Witchett of Washington High in Atlanta became Coach Richt's 10th commitment for the '11 class yesterday. Coach Ball is certainly making the most of the shortage at his position. Witchett makes the third WR commit for the upcoming class, joining Conley and Scott-Wesley.

My best guess is we take as many as five WRs in this class. I would say four, but both Scott-Wesley and Witchett can play in the secondary as well. An addition of Charone Peake would be stellar, and give future Dawg QBs a plethora of talent to target. And speaking of defensive backs, Damian Swann is quite friendly with Washington HS's #6.

Here's some of Zack's highlights. Not sure why the video runs over 9 minutes, it's actually only 6:30 long, fyi.


courtesy of MrJermichaelh
A couple other links - Chad Simmons' inside scoop ($$) on Witchett's decision and his analysis on Witchett ($$). 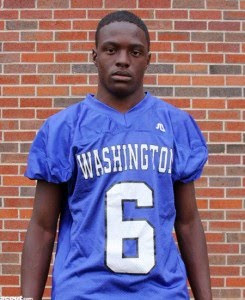 And some quotes from Witchett:

Hunker'd Down by Bernie at 5:35 AM No comments:

Update on the Stray Buffalo

A week or so ago we looked from afar at a buffalo that was wandering away from the herd. Now Markques Simas has been suspended, again.
No real surprise I guess at the suspension. But Coach Hawkins has left the door cracked for Simas to return in the fall, but without his scholarship.

The disappointing offseason for Simas comes on the heels of his best season in the pro- gram. He began last fall on suspension for the first two games but was one the Buffs’ best weapons during the second half of the year.

Simas' departure leaves the Buffs desperately shy at WR; essentially full of untapped talent and/or walk-ons. In other words, with little to no experience Logan Gray would likely be a starter in Hawkins' offense. Maybe even that guy in the cubicle next to you.
Just sayin'.
In other news, Colorado announced that the Oct. 2nd game in Boulder would be a 2:30pm start, local time. And Hale has tweeted that South Carolina and Arkansas would be noon kicks on ESPN or ESPN2.
Hunker'd Down by Bernie at 11:26 AM No comments:

In the words of Marvin...What's going on? 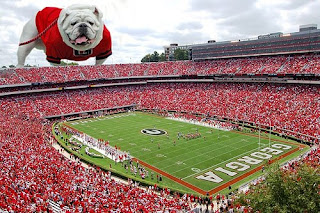 Back to baseball, many are calling for Bud Selig to step in and make things right. Selig...as in the guy who once decided an All-Star game would end in a tie. For him to actually do something right for the good of the game would go against his every principal. Am I right? Plus, he just doesn't have the stones.
I think that's the most I've typed about MLB baseball, ever. Which means it's time to stop. You have a good day sir!
Hunker'd Down by Bernie at 8:30 AM 2 comments:


I had the pleasure of eating lunch yesterday at Steverino's in . My search for this place began over a year ago, you may remember. I just happened to be driving by and saw the sign and immediately began craving everything that was on that old menu just a hop, skip and a jump from Butts-Mehre as you walked towards Hodgson's. 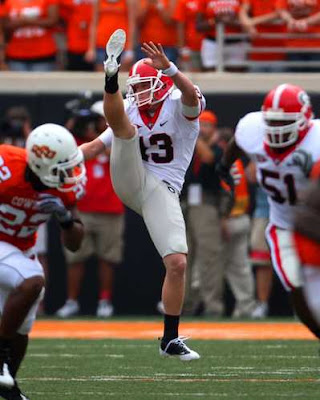 Anyway, menu's about the same from what I can recollect. And the ambiance is about as close as downtown can come to recreating the original. And while I enjoyed a couple slices and a cold beverage, I read this post by Corbindawg over at The Grit Tree.

If you haven't read it yet, he uses some quotes and some rushing realism to advise us to take comfort in Coach Richt's words this spring on the Bulldog Tour. And as usual, I'm always eager to join in any enthusiastic homerism. Afterall, I'm a Coach Richt guy as well.

Yet, it's hard to imagine this team will hit the ground running on all cylinders. And again, if you haven't read it...that's not what Corbindawg is implying either. Reading his words just got me thinking...

If this team does put together a special
season, what will be the key?

The defense has a new DC and three new coaches. They're replacing some heavy hitters in Curran, Jones and a slew of DTs. They're adjusting to a new scheme which will certainly require a few growing pains.

The offense has a wealth of returning talent, but a brand new signal caller. As well as some serious depth issues at both QB and WR. An injury to AJ Green would be devastating. And despite 's green horns, an injury to him would be cataclysmic.

So if things get squirmy again in Chickumbia (and let's be honest...when don't they?)...and Mallett brings more than a half loaded six-shooter to , we may have to rely on our best two feet. Surely most agree, the key word is special.


Let's remind ourselves, shall we:

Of course, my first thought is – we only averaged four punts a game last season? Then…oh yeh, turnovers to beat the band. Ugh! But forty-eight yards per boot is flat out kick'n it. The sooner the next Butler comes to campus with his best foot forward the better. No pressure Drew...

Gordon Ely-Kelso’s best year was 2005, when he averaged nearly 43 yards a punt. How well does that put what  did during his Ray Guyesque season in perspective? Holy crap!

And while it'd be nice to get Butler's punts per game number closer to 2, it's also comforting to know he can flip the field more often than not. For that matter, if Murray's offense sputters it's nicer to know that Butler can account for 200+ yards when needed.

And Walsh should be even more confident this season without the kickoff distractions and two years under his belt. I've liked the way CMR has called his number without hesitation with a lot of real estate to cover. It's probably made his numbers dip some, but a shaky psyche leads to a shaky leg and CMR has shown he's not shy in calling #57's number.

Throw in the fact that there's new blood blowing the special whistles and this definitely could be the facet of the game that proves to be the glue early...and the key to the whole season. 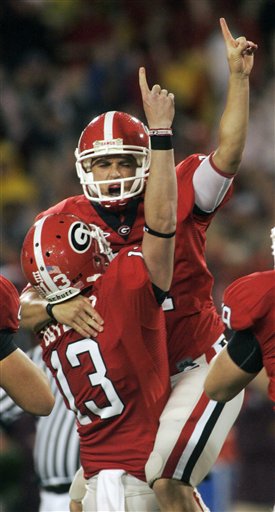 Hunker'd Down by Bernie at 7:41 AM No comments:

Was a really busy day with work. But I'd kick my own Dawg ass if I let this one slip by. One half of the King/Ealey Connector had a special day today.

And what better way to celebrate than to relive some yards, TDs and pancakes on Historic Mark Richt Field.

Hunker'd Down by Bernie at 9:49 PM No comments:

It's Memorial Day. And there's nothing I could type that would say more than this picture. 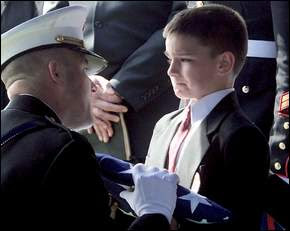 (h/t Mac, Semper Fi) That's Christian Golcynski accepting a folded US flag in remembrance of his father, Staff Sargeant Marcus Golcynski who was killed in Iraq by enemy fire in March. Whatever your plans include for today, I hope at least a few moments are taken to remember those who've paid the ultimate price for our freedom. 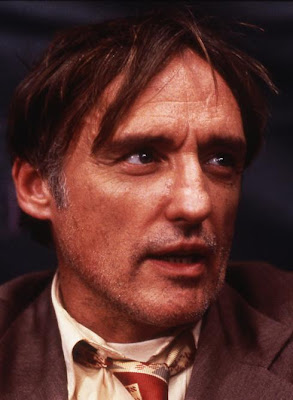 Been a busy weekend already, so I'll have to keep this shorter than usual. Have a great day Reader. Hope you enjoy your day at least half as much as I will.

Picked up this nugget from Weiszer's blog pertaining to a new era of nutrition. Rex Bradberry has been promoted from a simple GA on CMRs staff to the role of Sports Nutritionist.

“I think we’ve done a tremendous job of getting our guys prepared for the season, but I think in season we’ve maybe had some guys that have lost some weight...What we’ve learned is the biggest part is the nutritional aspect of it. We’ve got to make sure that we’re feeding these guys right.”   - Coach Richt

At least some of this new attitude seems to stem from the staff's recent visit to Blacksburg. Maybe this means we can expect less of the late season fashion gimmicks in Jax and more of a team that is fit and ready to play football.


Bradberry is a former walk-on under Jim Donnan who has worked as a part of the strength and conditioning staff and even was David Pollack's personal trainer in Cincinnati before his injury. He has a bachelor's degree in Health Education and Exercise Science,  a master's in Sports Studies and a PhD in Kinesiology.