Since the symptoms of the Georgia tackle football program are plentiful, the diagnoses are many and varied. I doubt many actually believe that a new S&C program is a complete fix all. And those calling for Bobo's head alone are casting stones with a blindfold slightly askew. But a real solid defense, one with a tenacity towards destruction and disruption...and with an identity that summated each individual number into the whole of one unit...


Well, that could go a long way toward providing the prognosis we all want to hear. 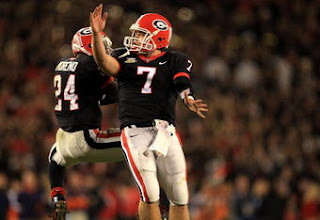 Because there's a big part of me that believes we are still working off of a Stafford and Moreno hangover. Those two players transcended their own team like select few others have in the history of Georgia football. Of course Zeier, Hearst, Champ, Greene and Pollack were superstars as well, but the success on the field always equaled and paralleled their stardom...if it didn't precipitate it altogether.


I'm not planning on belaboring my point that we've become a team waiting for something to happen instead of one initiating the contact of the sport. But it's worth some typeprint to wonder if we can once again become one unit with a defensive identity; can we have that attitude that when the game is on the line our defense will be there to make the play?


I think the reverse was true a couple years ago. We had a couple superstars that everyone looked up to...and waited for their next highlight. They left town and the bulk of it was placed on a redshirt senior QBs shoulders, and Cox practically crumbled altogether from the weight. This past season our superstar sat out four games. By the time AJ returned we were essentially at the end of our leash.


Yes, Aaron Murray appears to be the newest star on the horizon. But there's something to be said for shaking that hangover altogether and embracing an identity of a hard-nosed, in your face, we're going to end this right now!, flying to the ball defense.


Quite frankly, I'd much rather have that confident intensity when the game's in the balance this fall, than a bunch of eyes looking towards the one player they're expecting to rise to the occasion.
Hunker'd Down by Bernie at 5:50 AM