Monday's Meatloaf - the other side of the leaf

I've been tossing this leaf around ever since I found myself walking away from Folsom Field back in October. I've never considered myself a Disney Dawg, but I admit to being pretty Goofy at times. However, I do consider myself a Mark Richt homer. I genuinely love the guy. He's stayed 45 minutes late at picture sessions just to make sure that he got a picture in with my daughter...yeh, she's that beautiful.


Coach Richt is a nice guy that knows what it takes to finish first, but right now can't seem to find the starting blocks. And while you won't find me pandering for his pink slip to be written, you will see less indulgence in his media quips. I've never been in the arena, but now have a pretty good idea of what it takes to get your head lopped off by a black knight there.


If the state's former rock star is Rachel, I'm Ross. And we're officially on a break. Clinging to his every word and buying into his talk has recently only produced misery in his company. If the closing credits on this era roll a year from now and we officially part ways, I'll only wish him the very best. Truly.


And if we are eventually reconciled and bathe ourselves in red and black confetti...the coffee's on me. 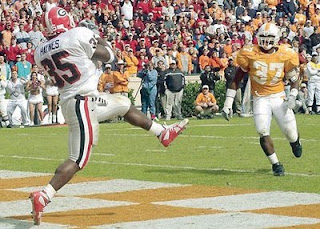 I'm sincere when I say that I hope to reconcile with our coach one day. But it's clear to not happen soon. If he signs everyone we're hoping he does on February 2nd, I'll be there to congratulate him. But he's signed top classes before. Like I said yesterday, those kids need to develop into football players who leave everything on the field...as well as fine young men.


And pardon me if I don't get all loopy again on the broken record being played about changing things up...and not wanting to go through this again...and the coaches are working harder...and the players are buying in. Yes, hope all that is going on. But the last two winters have only brought discontent. Show me in the Dome against Boise State. All these college football fans that have been clamoring over Chris Peterson...prove to me that they were wrong. Cuz right now I'm not sure.


Changing coaches is not something I take lightly. I've seen Ray Goff, Glen Mason, Jim Donnan and Mark Richt hired in my Dawglife. Two were guaranteed mistakes, one of which we ended up avoiding altogether. The one sure thing I've learned as a fan from those experiences, is that it never exactly goes as expected.


People who tout that we're not that far away are right, we aren't. But there's also the annoying fact that we didn't get any closer this season. We're back at the drawing board in January, eager to get excited about something in early February...then again in April...only to watch our hearts break in the Fall.


So who knows what a year may bring. Perhaps a season of vast improvements, maybe a nosetackle as big as a mid-size sedan. Conceivably we'll see a head coach with a hunger that eats right through his players.


And maybe...possibly...it will all be enough to turn this leaf back over again. The difference this off season for me is, I'm not goofily holding my breath.

"If he signs everyone we're hoping he does on February 2nd, I'll be there to congratulate him. But he's signed top classes before. Like I said yesterday, those kids need to develop into football players"

Great point, imo. Never been a recruitnik, and doubt that a services ratings are as valuable as is widely thought. It is much, much more fun for me as a fan to watch the development of a Thomas Davis (basically off the radar) or a Verron Haynes or even a Pollack or Greene, than to see a five star flame out. For that matter, while you can clearly see talent in AJ and Stafford, I would have rather had others if it translated to more wins.

Good point Ollllddude. Especially since this year's class stands to have some extra schollys.