Analysis
I think it's important to remember that the kids who signed Wednesday began their journey towards Athens when things weren't so sugary sweet. Sure, some of them have had eyes on Georgia for years. But going back to when they could officially be offered through when they could take their official visit always stood against a backdrop of turmoil. A disappointing 8-5 season followed by Coach Richt's only losing season punctuated by a dismal performance in a dismal bowl was not for the faint of Dawg hearts. Imagine being recruited to trust in the guy you're seeing getting beaten on the field and blistered in the headlines, blogs and message boards.

Yes, Coach Richt and staff deserve all the praise offered their way this week. They took a 14-12 record over the last two seasons into coaches' offices and mommas' living rooms all across the southeast and sold it to a class of quality athletes and fine young men. They went head to head with the last 5 seasons' national champs and more than held their own. That kind of fact doesn't always translate into recruiting rankings. Lemmings rankings bother me none. Taking some talent away from Saban impresses me plenty.


Once Jenkins signs tomorrow, the coaches will also have addressed needs on the roster and plugged the glaring holes with players who should be able to contribute early. And yes, playing time is at a premium in Athens. You come off a stretch like the Dawgs have and you can offer roster spot competition liberally. But most all of the signees in this class were destined to compete early regardless of where they went.
In short, Coach Richt's staff managed their available scholarships as valuable commodities and maximized their own state's resources in a year when it was both necessary and difficult to do so. Georgia had a wealth of talent in the class of 2011 and to watch it go to other schools near and far would have damaged the program for years to come.
Moving Forward
So what now? The coaching staff may deserve a pat on the back, but they certainly can't rest on any laurels. A 6-7 season doesn't erase itself with one 5 star holding a puppy, as cool as that was. And the signees themselves can't rest either. The 2011 class is mostly in good academic standing; the losses are expected to be minimal. But now that ESPNUs camera crews have moved back to Bristol and Chad Simmons has at least gotten a nap, these guys need to hit the books and make sure they walk across that stage later this spring. 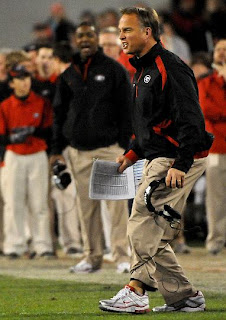 The coaches need a nap too. They've worked hard, they can even take a deep sleep if they need one. But moving forward, "wrong" needs a wrench, and there's no monkeying around. I purposely distanced myself from Coach Richt last month with good reason. I can't take anymore of the off season rah-rah until I see results on the field. And it's not just about Ws, it's about playing with a purpose other than trying to avoid a loss. So far the other side of the leaf has had positive results. Now it's time to get a couple coaches to fill the staff's attrition and start the overhaul.


Throw the stale Xs & Os out with the garbage and start afresh. Don't finish the drill this Spring, put the whole thing back on the drawing board. The brand new recruiting class has afforded the coaches the opportunity to have talent compete with talent. Jay Rome pushing Orson for snaps, I dig it. Ray Drew preaching to 90,000 on a Saturday...can I get an Amen!?


And the players on campus now have hopefully done some hand wringing, gotten rid of all that was crappy in 2010. To be quite honest, they're lucky they only lost two coaches. If they are to save the ones who are left, work has to be done. Personally, I don't even need to hear about it or see it in my Twitter timeline.


I just want to get a taste of it in mid April and then soak it in this fall.

YEA!! A good subjective article from someone who has placed their priorities spot on. We hear the background unforgiving disappoitment that plagued us all last year, but you buried it at the right time. Kudos to you for not letting the negativity creep back in to give this article a left-handed compliment flavor. Now, if you could just approach a few more dissidents and tell them to quit sifting the ashes, many of us would appreciate it.