From the Southwest Corner...

...RIP UgaVIII.
Like a bad episode of déjà vu. Damn. Just...damn. Instead of trying to put words to typeset, I've decided to repost from November of 2009. There's not a game between the hedges coming up and this time it's Big Bad Bruce joining his predecessors, but the message is basically the same. I'll just add a caution to remember that this is a family pet first and foremost, and that goes for Dawg fans just as much as others.
- - - - - - - - - - - - - - - - - - - - - - -
Clint Eastwood once said to Uga, I'm gonna make you a celebrity. To which Cecilia Seiler responded, Excuse me, Mr. Eastwood...but Uga is already a celebrity. 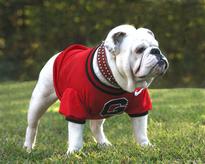 That one little story from the making of Midnight in the Garden of Good and Evil explains a lot about the gap that exists between those who understand what a dear mascot Uga truly is and those who have no clue.
On Saturday we'll pay our respects to a dog that transcends the term that defines his role in college football nomenclature. A mascot is simple, common...a side show. Uga is the University of Georgia. His passing is forever etched in our minds as it is the stone mausoleum in Sanford Stadium. When we look towards the Dawg House, our hearts will sink. 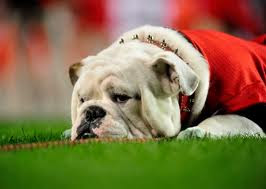 For a football game inside Sanford Stadium is to be played not just between the hedges, but on Uga's turf. There should always be opposing players just outside of his leash's reach. But on Saturday evening, Uga VI's Loran's Best will be playing upstairs with Uga V's Whatchagot Loran. Perhaps Erk will even throw down a bag of ice. There'll be a tussle.
And we'll smile. Cuz our mascot is adored. The Uga lineage has posed for more pictures than any Hollywood star on the supposed walk of fame. Each interaction is cherished. Each casual glance rewarded with that lovable wrinkled countenance. How else could you explain the fact that Uga's line in August is longer than all others...put together?
Sonny Seiler once described Picture Day as Santa Claus at the mall - times 100. Fitting of a dog who has both a family...and a nation.
RIP Uga, you DamnGoodDawg!
Hunker'd Down by Bernie at 6:49 AM

Frankly, I am appalled, not surprised, but appalled at some of the stuff I heard was posted at some places about this.

Bruce, RIP. You were a DGD.

You know it has been discussed many times that the field at Sanford Stadium should be named after this person or that person. I think you hit the nail on the head. Uga's Turf. RIP Uga VIII.