The guys at the DawgPost have speculated as to who might be the starter at each position when toe meets leather in the GA Dome Labor Day weekend. Such prognostication just begs me to throw my two pennies in. So stand back... 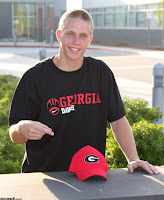 Frankly, beyond quarterback just about every position is up for grabs. Let's start with the receivers. I see Tavarres King at 1, but who's on the other side? Fletch, Seth and Dean unanimously had Marlon Brown there. Guess they know something we don't, but that would sure be nice to see #15 step up. I'll go with a newcomer in Michael Bennett. I've heard good things about him working hard, and I think that gets him on the field before some of the others.


Charles was another unanimous selection. He could really evolve into one of the team leaders in his junior season. But I'm giving White the nod here in a two horse race that's too close to call.


The biggest positions to watch offensively I think will be on the line. Coming off of a down year in terms of production, getting a new S&C program and a new position coach, interested to see how things shake out. More directly, I'm interested to see if we get any new starters from the redshirts or newcomers.

Defense
Year two of the Grantham regime should look vastly different than 2010. It should. Which is to say we hope that it will. Jenkins changes the makeup of the front seven dramatically, no question. Just the fact that Tyson can be a legitimate DE now is big. And if our new JUCO transfer is as good as I think he will be, it will be our LBs that reap the true rewards.

The question at NT becomes what happens to Bean and Geathers. Who will push for playing time at the position? Will anyone move back to offensive line?


Heading into spring ball (it's only a month away folks!!) I'm anxious to see the LBs shake out, not just depth-wise but also by positions. Jarvis Jones seems a legitimate starter outside, Robinson of course starts on the inside. Can Samuel or Gilliard step into the other MLB spot? I think it will be Samuel and then we see Washington play the other outside spot early with Drew gradually getting more and more reps. Sure will be nice to have some depth at LB.


Secondary: Boykin's easy. Tree and Rambo are locks to start. So who is the other corner? In terms of snaps Smith leads Owens, Commings and the new guys - Swann, Marshall. But by September I'll take Commings.

Special Teams
Butler, easy. Walsh, just as easy. But it's worth some discussion on returners. Boykin's back returning kicks, but who's handling punt returns? With Logan Gray gone...I'm going with Rantavious Wooten here. The competition is Branden Smith (2010s leader in returns and yards), Derek Owens, Malcolm Mitchell...maybe someone like Blake Sailors (h/t CFBZ)?


In the end I hope PR is a position that symbolizes the renewed spirit and optimism that we so desperately need. Everyone who wants it gets a look and the best man gets the honor. In a word, competition. Who wants it most?


Unless it's big John Jenkins back there fielding punts. We can't afford to lose him. Well, that's more questions than answers of course, but that's why they call this month February and not August. So...where am I off?

I know you're not overlooking Malcolm Mitchell since you're talking about the Boise game, but I think he might finish 2011 with as many yards receiving the others. And I also think he starts the season at PR.

So glad we got that kid.