That sound you heard over the weekend were bricks falling from the butts of Boise State offensive linemen.
I know, I know. Slow down Bernie...it's just April and that was only a intra-scrimmage with more players in street clothes than the entire brass section of the band. But I just can't help but be a little excited about the improvement our defensive line could see next season.


Kwame Geathers is not just the Spring's defensive MVP, but he's the poster child to off season dedication. His body is different than what we saw in Memphis just a few months ago. the Senator perhaps put it best when he said for once a player actually lived up to the off season hype.


I feel both refreshed and encouraged. Someone get me a DeLorean filled with plutonium. I gotta get past these next five months...STAT!


However, we should probably be proactive about this. If Grantham plans on toying with the possibility of playing both Jenkins and Geathers on the same line, we need to make sure there's no obscure NCAA rule that says you can't play two players on the same line if the campus doesn't also have a classroom that can fit both student athletes. I wouldn't put it past them.


If so, we need to start renovating some classrooms...knock down some walls. Or perhaps a few outdoor classrooms that have no ceiling. 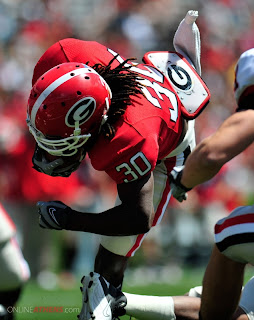 And now for something too funny not to share. I exchanged texts with Aaron Murray Thursday morning. Just as I was about to give up Facebook for a deadly disease that is only spreading contagion among our nation's youthful populace, it has put me in some type of contact with another Damn Good Dawg.

I'm often confused with another person with my exact name (who happens to play offensive line for Georgia) through social media. I've warned more than a few HS recruits that not only have they reached the wrong dude but that they should be careful who they send messages to (for the record, from my FB picture...it's pretty obvious I'm not a 300lb football player).


Yet I digress....I got a text that morning that asked me if I was going to be at Rankin soon.


About once a month I get one of those weird texts that is obviously a "misdial". But this one I suspected was from a UGA student-athlete since the Rankin Smith Center is a place we hope all of our student-athletes become familiar with so that they can maintain their athletic eligibility. So instead of deleting without responding, I simply replied "What? Who is this?" Soon my suspicions were confirmed that I had once again been a victim of mistaken identity, but I was genuinely thrilled when it came back as Aaron Murray (loosely confirmed by a quick Google check of the area code).

For the record, I quickly explained that he had the wrong guy. And then added some good luck for Saturday and a Go Dawgs! Unfortunately he had a slip of the thumbs again a few minutes later and apologized. Luckily texting ability isn't directly related to the ability to read defenses. I don't think.

To be honest I forget it's even there, but maybe I should take my phone number off of facebook. Maybe not. Perhaps next time Murray will call like Trinton Sturdivant did a few years ago. I'll gladly talk to him...as long as he isn't asking me to protect him against blitzing LBs. I can be a big man on campus, but not that big.


Here's a big fork Reader. Use it wisely, send the picture to Coach T and have a great Monday!

How bout running a little 4-3 and getting some D-tackle play?

I'm sure they will in nickel and dime situations like last year. But Grantham and Olivadotti have too much experience in the 3-4 to go completely back to a 4-3 base.

How about some five man fronts in goal line situations. With Arby Jones and Lott at the ends, Tyson and Geathers at tackles and Jenkins at the nose. Take the safeties out, play 4 lb's and two cb's up tight. With the athletic ability of Jarvis Jones and the the fact that Ogletree was a safety to start with you would still have the ability to cover but a ton of beef on the field to be able to come up with a few goal line stands.

Thinking back to the Liberty Bowl...maybe we should run that personnel grouping on 4th and goal from the 2 yard line as well...instead of kicking the FG...