I'm not pissed at Muschamp...

...even though he's guaranteed a win over Georgia at this Fall's WLOCP. Sure, he's a former player and the man many wanted to succeed Coach Richt. And of course he's now employed by enemy number one. But he was doing his job last night at Atlantic Station.


What really upsets me is that there is a Georgia fan out there...who passed over all of the beautiful girls in Athens...to marry a gatorette...on the same day we play them in Jacksonville.

A young, pretty girl sitting near the front of the room had a question for the Florida coach.
“Coach, I’m getting married soon and he’s a Georgia fan and …”
“That’s not my fault,” Will Muschamp said, playing to the crowd.
“My wedding is on the same day as the Florida-Georgia game,” she continued. “I was wondering: Can you guarantee Florida will win?”
Muschamp, the native of Rome, a long-time Georgia resident and former Bulldogs safety, smiled.
“I certainly can,” he said (and then he turned in my direction and alerted the crowd that this pronouncement almost certainly would be used in the local newspaper).
This should end any lingering debate about whether Will Muschamp has divided loyalties.

Ladies and Gents, there is mostly truth to the phrase that love knows no bounds. But some colors don't mix. I demand this "fan" turn in his Dawg card and be sentenced to a lifetime of jorts and orange tank tops. 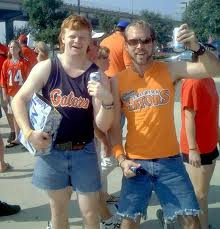 There are some pretty hot chicks that attend and have attended UF. I'm sure there are some that are marriage material too. That is some good pudding to want to get married on that day for though. Hope we win. It will serve as a lesson for that poor bastard.

I was trying to think of an artful way of saying that very thing.

Sadly he didn't have to go out on a limb making that promise. As Groo says, no matter the talent, we always managae to "nut up" at the wlocp.

Jeff & I were in Italy on our belated honeymoon last October, coming home just in time to get to the wlocp. We should've stayed in Italy. Smart guy to distract his Flarduh bride & inlaws with a wedding...

Where are they getting married? I thought that mixed marriages weren't permitted in either state.

I was married on that weekend...prior to the game, of course, but it is something that can happen.

As for Muschamp, that was a great way to take some of the pressure off CMR and put a lot more on himself—I'm cool with that, personally.