I haven't seen Jarvis practice. But from people who have...this ruling is bigger than the day they started slicing bread. Actually they've been saying two things for months: 1) Jones is going to be the defense's all around MVP and 2) that this NCAA thing is not going to amount to anything.


They were right on the latter. And I'm anxious to see the truth on the former. 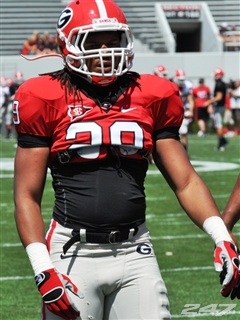 Just from a depth chart perspective this is big ($$). Chase Vasser stood ready to stand in while Jones served any type of suspension (for basically being innocent of anything). Chase is a baller, but by all indications is not nearly the playmaker that Jones is turning out to be. To have both to open the season at OLB is huge, especially given that Cornelius Washington continues to miss practice with a pulled hamstring.


But it's also big for all the reasons we've been hearing about. Jones can be a difference maker. When you open up the season against a directional school on pay per view, #29 on the sidelines in street clothes may go unnoticed. But when you open up on national television against a top 10 opponent you really want need have to have guys like Jarvis out there.


Lastly, to have this settled before the seasons starts is just as monumental. For the NCAA to rule on this after about a week's time says a lot about how the NCAA is attempting to handle things these days. I mean, it was nothing compared to the record time it took them to free Cam for the SECCG. But it has to be a tremendous relief to Jones and his coaches, welcome and needed news.

- - - - - - - - - - - - -
One more "lastly"...
Kudos to our compliance department for once again handling situations like this professionally and without any appearance of impropriety. Eric Baumgartner has to be thrilled to have competence meet his staff on the other side of the internal investigation. Too often these fine folks are overlooked (and in the case of the AJ mess are surely pulling their collective hair out). Job well done.
Hunker'd Down by Bernie at 6:15 AM