The keys to the junkyard

I watched the replay of last year's Georgia Tech game on ESPNU yesterday. I don't know how, but I had forgotten how much they ran all over us. It was embarrassing. I've been meaning to post more on the defensive side of things, but not sure it would be any more cogent than what some have already said. 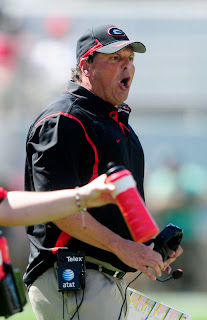 It's been a long time since our defense has had much junkyard fight. Instead we've pranced around like an over fed, entitled pup waiting for the plays to come to us. We asked for Martinez to be let go after he continually failed to give opposing offenses much bite. Eventually he was sent packing and I think his replacement is an improvement. But I'm not sure if Grantham has the key or not. There were some signs of tenacity last season...but there was also a lot of failure on third downs, chronic poor tackling and inability to adjust to the action on the field.


Perhaps the two headed monster of Kwame & Big John was the missing part of the equation, at least as far as a technical analysis will allow. We lacked a big man in the middle to make the 3-4 successful. If we can get more push up the middle and can continue to take the ball away like we did last year, it stands to reason that year two of Coach Grantham will be much improved.


But the 3-4 is just our base defense. We won't see much of the 3-4 against Boise I wouldn't expect, just like we didn't see much of it down in Jacksonville last year. So my point is that the transition to a new base is just part the problem we saw against Tech last year, and just about every other team we played.


To get a key to the junkyard you have to have the right genetic makeup. You have to be bred to believe you have to fight for everything you're going to be given on the gridiron. Nothing is gonna come easy, so buckle your chin strap and get after it.


The quotes and regurgitated jargon out of camp in August is one thing. Smacking Lattimore in the mouth late in the 4th quarter is another. And it might just be a key that opens the gate.
Hunker'd Down by Bernie at 12:54 PM

I watched the rerun as well. I forgot we muffed the opening kickoff and put ourselves in a hole early. King fumbles inside their 15 and later we muffed a punt and the Techsters recovered. We finally started pinching the defensive end in to take away that fullback and Tech immediately started sweeping. I thought Murray was superb.... driven from the pocket he always escaped long enough to hit pay dirt with one of those darts he threw.

Agreed, defense gave up over 30 points in 3 of the 7 losses: Ark, Florida, Auburn. Can't give up 30+ points and expect to win. But, offense couldn't score a td against UCF or SC and only 12 against Miss St. If you look at the 6 wins, 3 were held to less than 7 points by defense, and the other 3 wins defense won them by forcing 3-4 turnovers. If offense scores 28 against UCF/SC/Miss St, you're 9-4. If defense holds Fla/ Ark/Auburn to 24, you're 12-1. Offense only averaged 15 points a game against ranked teams.

"In short, a Junkyard Dog is one who must stretch and strain all of his potential just to survive. Then he can think about being good.” - Erk

The quotes and regurgitated jargon out of camp in August is one thing. Smacking Lattimore in the mouth late in the 4th quarter is another.

You are wise beyond your years.

Here's hoping year two in the system and the addition of an anchor in the middle will bring about the freedom to let the defensive scheme flow and attack the way it is designed to do. The ultimate wild card that the 3-4 personnel offers is, when faced with a spread offense, the defense can turn the tables by bringing different players on the blitz to keep the O off balance. We'll see.