Boo's been frustrated. Boo's been buried. Boo decided to walk out...then had a second change of heart. Lucky for him Coach Richt felt the same way. 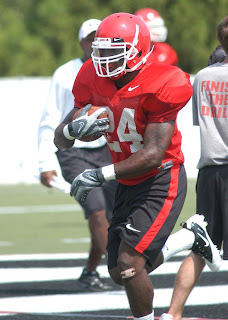 Something has been up between Malcome and the coaches for awhile. I hope this recent development has helped recharge Kendrun's battery. Cuz we could use his motor.
Hunker'd Down by Bernie at 6:16 AM