The transcript should be up later over at The Anti-Orange Page. The big issue last night centered around the second half offense naturally. And that's going to be the main topic when the offense only manages 6 points in the last 30 minutes of the last two games.


Richt's main scapegoat is execution, that and the fact that we were really just trying to run the clock out in the last frame. And any fan can see that there aren't a whole lot of options for Coach Friend to turn to if offensive linemen aren't executing. But from my view this is also an area that Coach Bobo continues to struggle with, adjusting his playcalling mindset in mid-game.


The Dawgs have a tremendous opportunity to turn this season from the ashes of early September to some glorified days in November. This defense can hang with anyone left on our schedule. We have a young running back eager to please. Somewhere, somehow the offense needs some confidence in itself as a whole. It can permeate from there, but has to start with the guy holding the playbook in the booth. 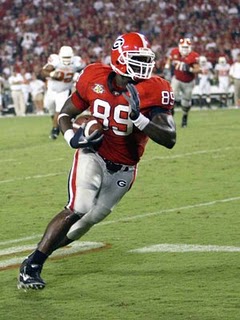 
Scott (Howard) asks about Boykin after getting hit hard at the end of the game. Richt - says he had his teeth rattled, they had to be wired to keep them tighter. He got hit a couple of times and his facemask actually got bent in and knocked in his teeth some when he was upended. His mouthguard on top just didn’t help all of them on the bottom.

That's some serious physics going on 'tween the hedges. Bent in facemask...damn. That's one tough Dawg right there.


The other thing that caught my eye was the response to the misuse of the fullback question. Or lack of use per se.


Gary in Buckhead says it was a great defensive effort. Wants to know why we haven’t seen more plays/passes to the fullback. Are we done using those plays, do we save them for Tenn? Richt - agrees, says we need to use more quick plays from the line of scrimmage like a FB can provide. Doesn’t disagree with that at all. Says it seems simple enough to do, but says we haven’t repped it enough and with a guy moving from TE it’s not as easy as it might seem. Gotta start revving it up for those short yardage situations where it‘s just not good to stretch it all the way back to the tailback. Agrees 100% and we’ll get it corrected.

Both Figgins and Ogletree did work out of the FB position in the spring game. Caught passes, blocked, ran...just thought I'd point that out. If we're not using Figgins enough it's because he's been overlooked. How can you overlook a guy that big?


Lastly, that picture of the d-bag pissing in the hedges went viral Sunday, into Monday. If we're going to have 50% of the same callers each week, can't any of these guys get a question to Coach Richt about the twigs in the opponents' protective cups? C'mon people! Stop brown-nosing the guy and give him something he can run with. Did he hand Coach Mullen some Charmin and point him to the nearest port-o-let? Did he remind him to tell his team that we have indoor plumbing in Athens GA?

Don't be surprised if we see a bunch of offensive plays against UT we haven't seen all year. (Hobnail boot, ya'll)

Well that O line is not catching very many breathers via substitution. They are getting a lot of reps.