Monday's Meatloaf - And here we are... 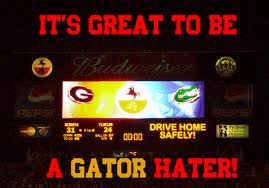 Halfway through, it's time to take a break. I don't know about you but I'm flat out exhausted. Saturday night took a lot out of me. I spent most of yesterday becoming one with my sofa. At 8:30 I guess I fell asleep during a commercial. Because I woke up and the episode of Always Sunny I had been watching had fast forwarded all the way through.


And time to take a deep breath and evaluate things some. We've reached the point in the season where things can take a glorious turn or can trip us into a brick paver. Face first. Ouch.


This season we get two full weeks to hate florida. This is the moment I personally have been waiting on for a long time. Let's start this thing off right...

With your bright orange shirts
and your sissy blue britches
You can go to Hell you sonsabitches!
Gators, Gators...how'd ya like to bite my ass?

Now, I'm sure we've covered before that Mrs. Bernie and I don't share a similar appreciation for certain cinematic masterpieces. To crudely over generalize, she digs those Oscar crapfests and I prefer a good cult classic. Like The Big Lebowski. I could watch that movie 20 times straight and still be laughing hysterically everytime Jesus Quintana talks bowling alley smack to the Dude as he's abiding.


But last week my little lady was kind enough to record something for me while I was at work. She can't stand to hear me quote The Princess Bride but knew I would enjoy seeing their reunion as it aired on morning television. Quite simply, I thoroughly enjoy this movie. I read the book twice and have seen the movie too many times to count. And yet this reunion had plenty of anecdotes I'd never known about. Make sure you catch the memories of Andre the Giant, especially as Crystal recalls the time he passed out in a hotel lobby.

There's your meatloaf...as you wish! Reader. Have a great Monday.

Bernie
Hunker'd Down by Bernie at 9:29 AM