Monday's Meatloaf - On a roll with a new role

Fat, drunk and stupid is no way to go through life son. And feeling uncomfortable in your own skin isn't much better.


My 9yo auditioned (I guess that's what you'd call it) for a role in a school production last week. Really proud of her for taking that step. And when she brought the rehearsal lines home to memorize before the audition I just had to laugh.


For a few years I've sat there and cringed every time she says the word "like". Cuz like, she like says like, like a lot. The lines to rehearse were of what I remember calling a "valley girl"; the stereotypical young female that uses a lot of words to say very, very little. It was apparent that it was the role she was born to play. If she doesn't get it I'll immediately know that there's another dad in my area that endures even more "likes" than I am exposed to.


And on Saturday night as Coach Richt continued to leave his offense on the field I couldn't help but think...this is a role I want my tackle football coach to immerse himself into. This is us, we're here in your damn house. I didn't wipe my boots off cuz your doormat is an ugly orange. We're going to continue marching down the field and give our punter a rest. If you don't like that you can either call your mom or try and stop us.


Awesome! And as important as that message was to send to the opposing sideline, I think it was exponentially more important to send it to Coach Richt's own sideline. So many Saturday nights lately I've been left wishing for a bye week; a break from the difficulty of watching another down of Georgia football.


Saturday night about 10:45 I was already geek'd up for Vandy. Ready to bark some more. Don't draw that curtain. Leave the lights ablazin'...let's GATA!!


In the end it remains to be seen if Coach Richt's squad can continue this march to Glory. Is the role of brash bully that eagerly accepts the challenge of 4th and short something we can continue to use effectively? Or is it a mask that we just pull out of the closet every now and then? 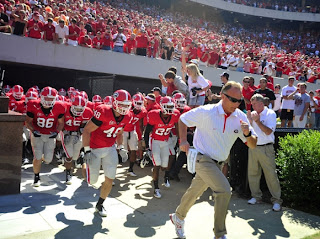 Coaches are human just like the rest of us. They can evolve, develop and recognize changes in the landscape. Unless you're Les Miles and football is simply a casual distraction from the art of being Lesticle. Still change is hard and lasting change is especially elusive. I doubt he'd admit it publicly, but I just have to believe that sometimes in private Richt wishes he'd made some changes that we all saw earlier than he did. Gratham's rolling right now. Wish we were in Year 3-4.

Of course fans have a role too. I expect to see the Richt supporters start to be more vocal this week with the I told you so's. Just like I expect to see the other end of the spectrum to continue with the Don't be fooled, it's going to have a familiar taste at the end. Meanwhile most of us will just continue wait and see attitude.

Lot of football left. Gotta take em one game at a time. But this meatloaf? Go ahead and take two big pieces, a mound of mashed potatoes and some gravy there. We'll call it the 3rd and 57 plate. Might need two napkins.

Bernie
Hunker'd Down by Bernie at 9:30 AM