It feels so nice to be on the winning end of this thing for once. The whole experience is different. You get to look down on their fans as they head for the exits. And this morning we can continue to look down on them in the SEC East standings.

- Terrific game. Really proud of the guys in red and black. HOW BOUT THEM DAWGS!!!
- To overcome the special team blunders and erase a 17-3 deficit is really something to be proud of.
- The defense played even better than I expected. I think Grantham has had this game circled for a year. They played lights out.
- The one long kickoff return they had definitely came after a fair catch signal. But still is no excuse for providing such a wide lane for the return.
- And then the defense held them to a field goal. Made lemonade out of lemons.
- Great call by Bobo to let Murray throw late to help seal the deal. Great throw and great grab by Conley.
- Awesome to see Samuel running downhill into the endzone. That was a big statement. Offense just decided it would happen and made it so.
- Another great statement I thought was when they were determined to draw us offsides on that fourth down at midfield. We didn't flinch. And Muschamp's squad blinked first.
- Welcome back to the cocktail party Will. It's not a party for fake juice.

Safe travels everyone. See y'all in Athens! 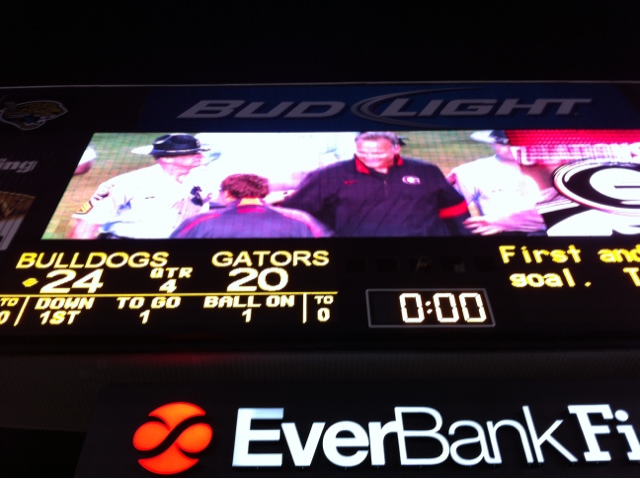 Fair catch signal? on a kick-off, are you nuts?

After Demps' return for a TD, we started kicking short. DeBose then returned one 60 something yards after signaling for a fair catch. Don't know if they even mentioned it on television, but at the game it was clear he signaled and Richt came unglued trying to get the refs to do something about it.

Then we just started squibbing it.

What a great day to be a GEORGIA BULLDOG! I feel both joy and relief in equal amounts.It took me about 28 hours to get home to Tybee Island Bernie! What the hell happened to Sunday? Let's make this an annual celebration again! GATA