2011 Seniors have been through the valley

They came in on top, either during a 2007 redshirt season in which we won the Sugar Bowl or during the 2008 season that finished with a 10-3 record. Then they saw how dark the depths of mediocrity can be in the SEC with the 8-5 and 5-6 seasons that followed. 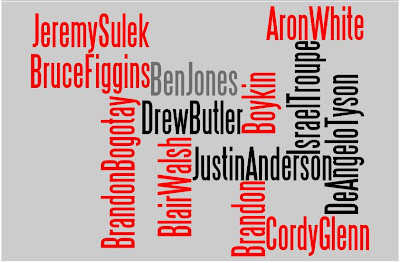 Saturday they will emerge from the tunnel one last time...as a small group of seniors that helped Coach Richt turn the Georgia football program around. And are one small step away from getting the team back to where it hasn't been since 2005.

"Right now they are very optimistic about how their senior season can finish," coach Mark Richt said. "We all know it wasn't a tremendous start, but through their leadership and their play and perseverance, we've found a way to battle back in this thing and turn this thing into a season that might be one that everybody will remember real fondly. I'm proud of them.
"They've been through a lot. They've been through some rough moments, but they're here and they're in a good place right now."

If there's one solitary group of guys that deserve to go out on top, we need not look any further.


**I omitted Trinton Sturdivant as he has yet to make a decision about 2012. Once that decision is made, either way #77 will get his due here at BDB. You can bank on that.
Hunker'd Down by Bernie at 7:44 AM

FYI - used wordle.net for the pic. Actually made two, one of starters and another more comprehensive one. It embedded the wrong one at first. Corrected it once I caught the error.