To grow up in Athens in the early 1980s you couldn't escape the Georgia Bulldogs. Herschel and Dooley's faces and names were plastered everywhere. Businesses all around town used the Junkyard Dawgs monicker or the Go you Silver Britches! to draw in dollars.


But it was one voice that I most closely identified with the football team. One man helped me Get the picture now! Television appearances were confined to just a couple games a season, so it was a small radio that brought college football to life for many fans. On Saturday afternoons I remember Larry's voice as easily as I remember recreating Scott Woerner's latest interception in the backyard. 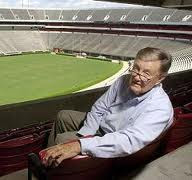 Over the years Munson's calls created countless I was <insert location> when moments. Dawg fans always knew where the mute button was on their remote because there was only one voice that could measure up to the task at hand on Saturday afternoons. I still don't know how I didn't break our sofa as I danced upon it when Michael Johnson cradled 70XTakeoff in the corner of the endzone on the plains. TOUCHDOWN! TOUCHDOWN! MY GOD A TOUCHDOWN!! He's encouraged me to hug perfect strangers in stadiums across the southeast and created endless discussion around my dinner table as my wife and I pass along favorite calls to our kids. He's running OVER people!


You can't hunker down one more time without giving Munson a direct shoutout. Thanks to him, millions of people know what the heck a hobnail boot is. Lindsay wouldn't have run nearly as fast if he hadn't broken that metal steel chair with a 5" cushion. It was Rex Robinson's field goal that beat Kentucky in 1978, but it was Munson that informed us the whatchamacallit had been kicked out of it. He sounded nearly giddy in Opelika when someone leaned around and threw their bourbon all over him. His cigar never tasted so sweet as it did in Jacksonville 1997, once he finally let Scott light the thing.


No lead was ever safe and the clock was always in Old Lady Luck's pocket: tantalizingly slow with the possibility of a win, and blazing fast when we trailed late. Munson was always there to suffer with our Dawg hearts during the losses...and to lift them higher than we could possibly imagine with the wins.

His voice, our hearts...forever entwined. When outsiders say Larry Munson was the voice of the Georgia Bulldogs, true Dawg fans know that he always will be. Forty-two years underneath the headset is a drop in the bucket compared to the eternity in which he will be remembered. He was a living legend, and now he rests with those who've graced the field before him. I don't wear my headphones in the stadium any longer. But I'll always carry his voice with me. It's as natural to me as a Georgia G.


God bless you Larry Munson! Your voice will never be silenced.

Glory, Glory to ol' Georgia! Heroes have graced the field before you. Men with hearts, bodies and minds of which the entire Bulldog Nation can be justifiably proud.

A tradition of unbridled excellence demonstrated by these individuals and many others spans more than a full century.

And now a new breed of bulldog stands ready to take the field of battle, to assume the reins of their Georgia forebearers and continue that tradition, understanding that there is no tradition more worthy of envy, no institution worthy of such loyalty, as the University of Georgia.

As we prepare for another meeting between the hedges, let all of the Bulldog faithful rally behind the men who now wear red and black with two words, two simple words which express the sentiments of the entire Bulldog Nation.