The easy thing to do when evaluating Mark Richt would be to regurgitate the awesome sauce that was the ten game win streak. Whether you are a little too eager to point out that the wins came against the schedule's inferiors or if you are a little too eager to claim that this was the head guy's best coaching job of his tenure, the fact of the matter is that when Richt's 2011 team needed every single win to get back to Atlanta they got it.


Personally, I have that weird feeling of being both satisfied and hungry for more. Kind of like after you've been around the Thanksgiving table three times yet still desperately want two slices of pumpkin pie with a couple heavy dollops of whip cream. My low point during Richt's time in Athens came in Boulder last year; no loss this season came close to matching that one. And my high point of Richt's time at UGA was probably the 2005 LSU win; the win this year in Jax had nearly all the Glory of that one. Just lacked the coronation at the end.


Looking back to January, we needed to become a 60 minute team and Mark Richt made the changes necessary. We needed a coach willing to grab the steering wheel and correct for the recent poor navigation and he cranked up the energy bus. We needed to infuse some young talent into the depth chart and he produced a Dream Team. 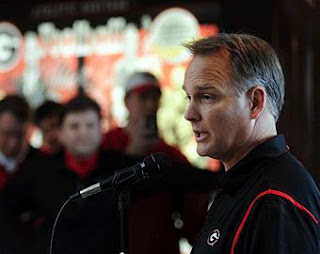 But I'm finding it pretty easy to refrain from the back slapping and the pom-pom shaking. Not because I'm bitter over Saturday night's second half, or the other two losses for that matter. No, every time I feel like basking in the glow of a 10-3 turnaround reality strikes me in the face.


For every three or so defining highlights from this season (such as Samuel's touchdown in Jax and Aron White's catch and run in Oxford) there's another one that could've sent the season spiraling into the sewer drainage (such as Drew Butler's "tackle" in Nashville and the 4th and 57 in Knoxville). My point is a lot of seasons hang in the balance with certain plays that are either made or not, like Daryl Gamble forcing the fumble against Vandy in 2007. It puts things in perspective: we could just as easily be packing up the practice fields and interviewing candidates this weekend instead of sending recruits into Richt's office and prepping for a January bowl.


Not getting so giddy over things has done me well. I enjoy spectacular moments like White's hedge jump just as much as the next guy, but I've come to enjoy my carefully measured glass of kool-aid when it comes to overall evaluation. So my final analysis of the 2011 season will be nearly as much about me as it is Coach Mark Richt. As a fan and especially as a blogger it is easy to take one off season quote for instance and make too much out of it. The same goes for losses and the same goes for wins.


I like Coach Richt a lot and hope he's our coach for a long time. I'm glad he's not on the "hotseat" this off season. But more than anything I'm thankful he now has his hands firmly on the steering wheel. The course was corrected. Unlike last December, the destination is ahead of us instead of behind.

Well said, Bernie.  The other thing to note is that returning the program back to elite status is gonna be kinda like trying to lose weight.  If you're 40 lbs overweight, the first 30 of that will come off relatively easily by making some pretty basic course corrections with diet & exercise.  But losing that last 10 lbs requires an even greater level of commitment & dedication.  It's much harder to lose those last 10 lbs than it was the first 30.

That's kinda where I see the program now.  Richt dropped those 30 lbs of baggage (coaching changes, player changes, S&C changes, etc).  But going from 6-7 to 10-3 is easier than going from 10-3 to 12-1/13-0, that's going to require an even higher level of dedication and effort from everyone involved.  So like you, I'm satisfied with what has happened so far, but definitely still hungry as well to see hopefully see that next step in 2012!

Well said, Rev. It's amazing how far the team has come from 6-7 and the future is actually pretty bright in Athens for next year and years to come if the players buy in AND the coached press on with renewed enthusiasm.

Good stuff Bernie. I am still basking in the afterglow ..... 7-4 against the Hillbillies, 10-1 against the Gnats, the Visor beats us but doesn't play in the championship game -we do! ..... and the awesome ass whipping on the Barners and adding some insult by telling them .... we are running the damn ball.... put 9 in the box if you need too but we are running it down your throat the second half. That was beautiful. Season went by too fast.