What's the big deal with Fatheads? I guess I can understand the ones that are of a team's helmet or something of the like that is timeless. But if I were from Wisconsin and was the biggest cheesehead to ever cut it, why would I want to lay down $100 on a Fathead of Clay Matthews when in a few years or less he might be a 49er, a Bengal or (gasp!!) a Viking?


What becomes of my fathead then? Ebay as a collector's item? Trashcan? Halloween decoration?


It just baffles me sometimes what we spend money on. And trust me I'm including myself and those close to me in that. My 9 year old used to love to dump money into this gumball type machine at our local Kroger. Except instead of gumballs it gave you one of those little plastic containers with the cheap prize in it. She'd beg for $.50 and even break her piggy bank just to throw coins into that thing, turn the dial and hear the prize tumble down. She was just sure this time the little miniature puppy would come rolling out into her little palm.


WompWomp!...Another cheapass keyring. Which is just as worthless as a Vince Young Tennessee Titan Fathead.


Speaking of worse than bonkers...quick reminder: tomorrow is Munson's Memorial. If you'd like a special sticker and ribbon, see Kevin at 11:30 in the Tate Center by the big tv. (check the FB page for more updates) 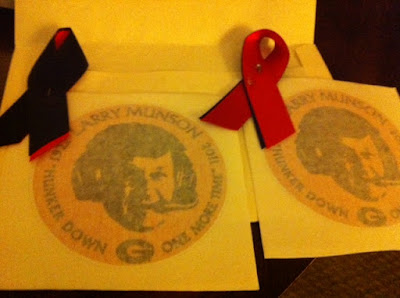 Already miss that guy. See you there!

There was the rumor that Kansas was talking to the Pumpkin King . I guess Kansas likes its Coaches---> Super Sized! What makes these coaches morph into elephants  when they are surrounded by athletes?  It looked like CTG had slimmed down and toned up some from year 1 to year 2. Good example for the team to follow. Guess Coach T got involved.
Joke:
How do you turn your girlfriend into an elephant?

Marry her.
Have a great day!

Yeh, those FU fans are so relieved now that their "decided schematic advantage" has boarded a JUMBO jet. Not worried in the least since BOOM M'FER has promised them the best OC in the world.

You may have already talked about this but, last Saturday at the SECCG a rumor was floating around (and was on ESPN as well) that Texas may go after Saban after Mack "retires". Interesting if he does "retire" to see what plays out.

I wonder if Texas is big enough for that ego...