A Florida woman wants to change her son's middle name. That in itself isn't newsworthy I guess. But her son (now 4 years old) is named Spurrier Urban Wiley. Jen Wiley, "Spur's" momma is upset with Corch now that he's a Buckeye and no longer a loyal slitherer. 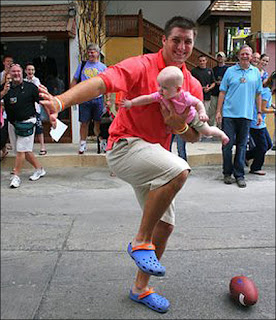 You just can't make this stuff up folks.

“I want to change his middle name,” she said.
Wiley actually has to travel to Ohio several times a year for work; so ironically, Spurrier Urban Wiley was born in Ohio.
The name doesn’t faze the now 4-year-old Spur. He doesn’t really understand his mom’s frustration, but he’s playing along.
“He wants to be Spur Willy Nilly Silly Bear Wiley,” said Wiley.
Wiley said anything is better than Urban.
It’s a name that reminds her of the letter the former Gator coach wrote her son shortly after his birth.
In it, Urban Meyer wrote, “I look forward to growing with you as a Gator over the years.”
Wiley’s husband isn’t on board with the change, and she said she won’t officially change her son’s name unless her husband agrees.
If he does, she’s thinking Tim after Tim Tebow, the great Gator quarterback who is becoming a star in the NFL.

I hope this proceeding makes CourtTV . I'd like to see Corch called as a witness and address that letter he wrote the little reptile.