Richt and McClendon are pressing hard ($$) for Stephenson running back Mike Davis to sign with the Dawgs in February. This comes after Keith Marshall committed last week, Davis de-committed from Florida and UGA jumped into the thick of things.


Yesterday Davis was on campus to watch practice and talk with the coaches and players. Sounds like things went pretty well. 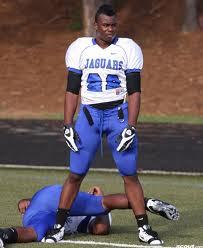 When asked to rate Thursday’s trip on a scale of 1-10, Davis said, “I’d give it a 10. I was really impressed. They really showed that they wanted me, they really need running backs, and I think I could fit in very well in their offense. It was good visit, they want me to come back for an official visit, and I’m planning on going back there on Jan. 28.”
After arriving on campus, Davis attended a meeting between UGA assistant Bryan McClendon and the team’s running backs. When practice started, Davis said he spent the entire session next to coach Mark Richt.
“It was just Mark Richt and me for the whole practice,” Davis said. “He wanted me to get a good feel for practice and the team, and see how they get after it. He talked to me about the running backs, how they really needed running backs, and if I came there that I would have the opportunity to play right away. He just made it very clear that they need running backs, and they want me.”

Georgia's decision to get back into things with Davis once he soured on Florida brings several things to mind. It's impossible to overlook the fact that we currently have three scholarship backs who spent at least one game on the sidelines for disciplinary reasons. Will all three be back in 2012? Given our luck at the running back position recently it's hard to feel too good about seeing all three return.


The other thing that comes to mind is another top running back we've been recruiting in Todd Gurley. Like Marshall, he's from North Carolina and there's been a lot of talk that the two would end up on the same campus. That seems very unlikely now. Gurley likes home state favorites UNC and NC State. He's also being courted heavily by Clemson.


Davis looks like he'll make his official visit to Athens in January. The recruitment of Gurley and Davis is going to be an interesting one to watch.
Hunker'd Down by Bernie at 8:27 AM

if they want to keep Marshall committed they better not "back off" him now either...  he ain't signed nothin'

Luckily he's an early enrollee. He won't sign until February, but he'll be a Dawg in just a couple weeks!

From watching the interview with Todd Gurley, I really would'nt be too surprised to see him at UGA. What a freaking coup to get all three of these guys! The picture just looks pretty roseyright now ,but I sure don't want to jinx anything so I'm not going t say anything else except GO , YOU HAIRY F___ING DAWGS!