Well, the time is almost here. Georgia takes on Michigan State in the 2011 season finale on Monday. After answering each other's questions earlier in the month, Mike of The Little Brother Blog and I decided to collaborate on a preview. We break down the Outback Bowl matchup from both sides of the ball and give our keys to the game as well as which players to watch. Here are our thoughts.


When Georgia has the ball

Bernie -- I wish I could say the Dawgs will come out and run the ball early, often and effectively. But we don't know how strong tailback Richard Samuel will be coming back from injury or how many carries Crowell can manage. So the key for Georgia will be how well quarterback Aaron Murray works through his progressions and finds his targets. To do that we'll have to slow down the MSU pass rush. I think our interior line can match up well with All-American Jerel Worthy, but we've suffered with protection on the edge. So neutralizing William Gholston and Denicos Allen will be key.

Fortunately for Georgia, there isn't anyone in the nation that can effectively cover Orson Charles. So if we can provide Murray adequate time, I think our #7 and our other playmakers can get the separation needed to move the chains and make big gains.

Mike -- The Michigan State front seven is going to try and put a lot of pressure on a team that allows a considerable number of sacks and an offensive line that is massive, but not quick. The blitz packages defensive coordinator Pat Narduzzi employs will try to exploit the lack of quickness of the offensive line and the shaky blocking of Orson Charles with the use of his linebackers from all angles, and bringing Johnny Adams on corner blitzes. Adams and the other defensive backs do a good job in man coverage, and should be spending most of the game working to lock down the Georgia receivers and give the front seven time to get into the backfield. Will Gholston will be huge off the edge and should have an advantage in putting pressure on Murray.

Georgia has a well-balanced attack, and Murray effectively moves the offense down the field. But apart from LSU, he has not seen a secondary as physical and with as many playmakers as Michigan State has. If there is ample pressure on Murray, there should be enough three-and-outs to give the ball back to Kirk Cousins and the offense.

When MSU has the ball
Mike -- The run game will be a focus early, and also keeping Cousins on his feet. In an attempt to use the speed and aggressiveness of the Georgia defense against itself and neutralize the blitz, the passing game will go laterally to Keshawn Martin, B.J. Cunningham and Keith Nichol in the flat and let them try to make some plays. Offensive coordinator Dan Roushar will seek to spread out the Bulldogs defensively and get the ball to his playmakers and let them try to make something of it. 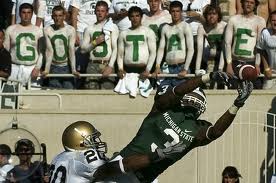 The most important thing the MSU offense can do is convert third downs -- something Georgia does a great job of stopping. They did not allow a first down to LSU in the first half of the SEC title game, and held the Tigers to 1-of-9 in the game. Michigan State will have to do a much better job of that if the Spartans are going to come out on top in this one.

Bernie -- I like what MSU has going in Bell and Baker. Together they give opposing defenses a lot to think about. But they're going to have a hard time getting yards Monday in Tampa. In the games in which the Spartans struggled to rush the football (Notre Dame, Ohio State and Nebraska) defenses were able to contain #24 and #4 and make the Spartans one dimensional. Christian Robinson and Alec Ogletree have really benefited from having true nose tackles in Athens with Kwame Geathers and John Jenkins. Together they'll work to clog up the middle while Jarvis Jones creates his usual havoc on the outside.

If the Dawgs can pin their ears back it could be a long day for Kirk Cousins. On the other side of the coin, if Bell and Baker can break loose and put up 100+ it would give the veteran QB enough time hurt Georgia downfield. 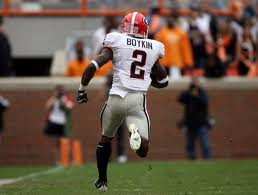 Bulldog to watch
Brandon Boykin. He came back for his senior season when he nearly left early. In his last game for Georgia he'll likely be charged with shutting down B.J. Cunningham. It should be fun to watch these two go after it and Boykin has the skills to neutralize Kirk Cousins favorite target. Boykin hasn't seen many balls thrown his way this season, but the Spartans will look for ways to get Cunningham involved early and often. Boykin should have plenty of chances to make some plays Monday. Plus, he's overdue for a kickoff return touchdown. Could he get one in his last game in the silver britches?

Three keys for Michigan State
Spartan to watch
Max Bullough. The Spartans middle linebacker is the key to the run defense and the pass defense. He leads the team in tackles and makes plays from sideline to sideline throughout the game. In the pass blitz game, he is central -- along with linebacker Denicos Allen -- to apply pressure on the quarterback. He will come through the A-gap either as the ball is snapped, or on a delayed blitz. The Georgia rushing attack will give him plenty of chances to make plays and the passing game should give him opportunities to get to Murray.

Overall Thoughts
Bernie -- These two teams share a lot in common: runners-up in their conference, rely heavily on defense and are well coached by experienced men who have their teams prepared. An intangible to keep an eye on is which team wants to win more. Georgia has made a significant turnaround from last season in which they rarely finished games strongly. This season they've played well in the 4th quarter. My feeling is that the Spartans are more upset about missing the Rose Bowl than the Dawgs are about losing out on the Sugar. Plus Georgia has a number of players from the state of Florida and Tampa area specifically.

So which team is more eager to win the Outback Bowl and willing to fight for it for 60 minutes? I think this is a close game for 3 quarters. I think the teams are about as evenly matched as any other bowl game's two teams. However, in the end I think Georgia has the playmakers on the offensive side that can eventually neutralize the opposing defense more effectively. I think Orson Charles, Brandon Boykin and Aaron Murray have big plays that make the difference.

Mike -- The winningest senior class in Michigan State history was "denied" a Rose Bowl for the second consecutive year. Getting the opportunity to play a BCS-caliber team in a bowl game is the next best thing, and they know it. The Spartans should come out firing like they did against Wisconsin in the Big Ten Championship Game. If they come out flat, they will be in trouble.

These teams are mirror images of each other, and I am torn between thinking it will be a shootout or a defensive showdown. But, the Spartans defense has struggled in the first quarter and gives up plenty of yards. I don't expect that to be much different this time around. The second quarter, though, has been the best for the Spartans (in two games with Wisconsin, Michigan State outscored the Badgers 45-0). I expect them to turnaround after a rough first quarter and take the lead. Only difference, they must keep the foot on the gas in the second half and not let up. Kirk Cousins and his trio of senior wide receivers will have to be making plays and executing throughout the game. If they do that, they should win.

h/t to Bernie and Mike for the joint blog.  Pretty  good stuff.  Interesting to note the difference in point spread predictions between the two  and I have to agree with  Bernie.  Michigan State was  a stronger team in 2010 when they  were co-champions of the Big  Ten and  faced a 10-3 Alabama in the Capital One Bowl.. That game ended in a 49-7  Alabama beat down.
This years Michigan State almost won the Big Ten championship again ….and again it finds itself  facing an SEC opponent similar to Alabama in ability and talent. A 10-3 Georgia with a  defense that is one of the best in the country . Georgia also has a capable running back that should have gained a 1000 yards this year and is backed up by a stable of experience running backs.
Mark Richt is 4-1 in his last five bowls…… Michigan State is 0-5.
While I don’t expect the Dawgs to win by 42 points, I think Bernie’s prediction is right on target!

AthensHomerDawg, I am curious what makes you think Michigan State was a strong team last year. I wouldn't say that at all, in fact, I think this year's team is FAR better than last year's team -- keep in mind the linebacking core actually improved this season after the loss of Greg Jones and Eric Gordon. And anyone lost at another position was replaced by someone better, except for maybe at punter.

"A 10-3 Georgia with a  defense that is one of the best in the country .
Georgia also has a capable running back that should have gained a 1000
yards this year and is backed up by a stable of experience running
backs." Replace Georgia with Michigan State, and you also described the Spartans...interestingly enough.

Hopefully, Monday proves to show a game as evenly matched as the two teams are on paper.

I figured that a 3 loss team that lost to a team that it beat twice in regular season wasn't as strong as the team that was the co champ of the Big Ten.  I enjoyed your co-blog with Bernie! Thanks a lot! Good luck on Monday. We will need to bring our A game to win.