Game over. As the season went, so did the Dawgs only NCAA game. It was an edge of your seat ride full of heartbreak and thrilling play that often left lofty expectations unfulfilled. In a way this one tournament game was a microcosm of the entire season. The peak always seemed within reach, but the pitfalls were hell on the tailbone.


A few thoughts on the loss:

I'm sure there's a lot of disdain out there about such a talented team falling short as well. But I'm choosing to remember this season for what it was: a bumpy road full of ups and too many downs that was a firm step in the right direction for a program that's desperately needed it for many years.

Assuming it happens, Mike Hamilton firing Bruce Pearl would be like one stooge firing another.

Coach Fox has brought the program a long way in two years. A win today over Washington in the first round of the NCAA Tournament would go a long way toward taking it to the next level.

The Bulldogs got to the NCAA tournament in 2008 after an unexpected run to the SEC tournament title, but could not build on it the following season.
“Check our record, we’ve been fifth or sixth in the SEC East for the last seven years,” McGarity said. “I think if you had said coming in that you would be in the NCAA tournament Year 2, I think you’d probably cash that check right now, but I think that’s a stretch.”
After all, McGarity points out, Vanderbilt’s Kevin Stallings – completing his 12th season with the Commodores – never finished above .500 in the SEC in his first four seasons.
Stallings got to the NCAA tournament in his fifth season in Nashville and has made four more trips.
“To do it right, it takes a long time to develop and patience is key because you don’t want to cut corners,” said McGarity, who became AD at Georgia in September after seeing basketball success at Florida when he was senior administrator there. “You want to build your program with a strong foundation, you want to recruit the state hard and I think those are the things Mark has done.”

I'm ready to take the next step. And I think the Hoopdawgs are too.

I've got the corned beef brisket brined and ready. Hope your day is full o' shamrocks and serpent free!

My friends are the best friends
Loyal, willing and able.
Now let’s get to drinking!
All glasses off the table! 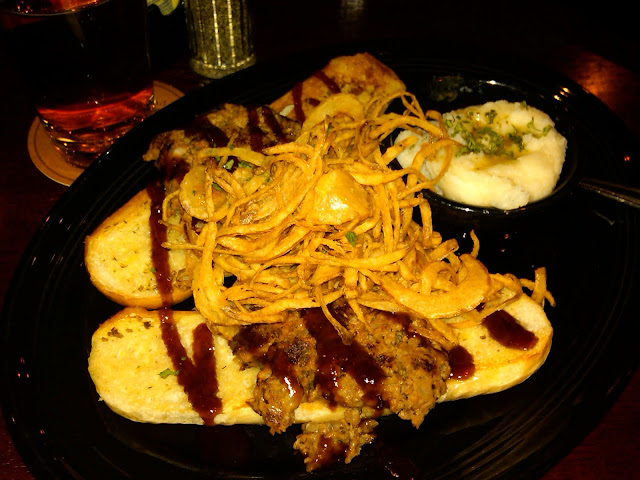 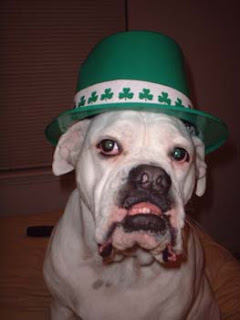 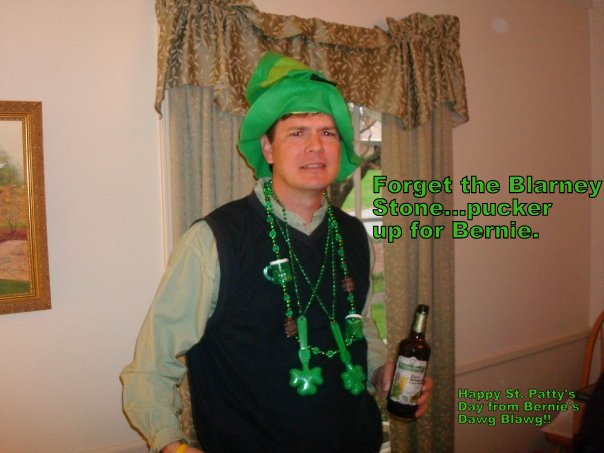 Georgia OLB signee Sterling Bailey completed his senior basketball season and then had surgery to repair a torn labrum in his right shoulder. Sounds like he won't miss much action in Athens though.


“He had some tears in his labrum and he just had to get those repaired,” East Hall coach Bryan Gray said this afternoon.
The 6-foot-5, 260-pound Bailey is slated to be an outside linebacker at Georgia.
Gray said whether the surgery would mean Bailey will redshirt is up to Georgia.
“They have been advising him and he’s been in constant communication with Georgia’s medical staff,” said Gray, who said Bailey wanted to finish the basketball season before undergoing surgery.
Gray said he thinks Georgia is targeting Bailey to be ready to practice in August. Gray believes he could be full-speed by then.
“Knowing the kid and his great work ethic, I’m sure he’ll be ready to go come August,” Gray said.

That would be a good thing. Cuz we need some as many bodies at OLB this Fall as possible.
Hunker'd Down by Bernie at 5:42 AM No comments:

Couple weeks ago I wondered if I was starting to respect Stephen Garcia a little too much. And now that we know his pre-Chick-Fil-A Bowl hotel party was indeed a reinactment of a Penthouse forum letter that Steve Tanneyhill wrote back in 1993, I will only restate that I simply no longer believe him to be a total douchebag.

Sources told ESPN.com that Garcia's latest suspension stems from a curfew violation at the team hotel in Atlanta the week of South Carolina's 26-17 loss to Florida State last season in the Chick-fil-A Bowl.
The incident occurred a few nights before the game, and Spurrier considered at the time suspending Garcia for a portion of the bowl game. But backup quarterback Connor Shaw was ill and running a fever, and the Gamecocks weren't sure he would be able to play.

Following the script, it seems the ol' BC feels even less of his starting QB, if that were possible.

Garcia's fifth spring in Chickumbia and this is the third time he's been suspended for part of it.  Tanneyhill never came close to those kind of numbers.

NC State possibly wanting Coach Fox is NOT news. UNC coming after him after we trounce their baby blue asses to get to the Sweet 16 Sunday...now THAT would be news. NC State is like North Carolina's version of Georgia Tech, without the academic rigor.


Reminds me of a funny story from Joe Waterloo. He was in some bar about a decade and a half ago and was watching a football game with someone who happened to be an NC State fan. I think they had just grown a wild hair and beaten someone like FSU maybe. The Wolfpack dude grew so brave as to say, "Dude! The Pack is back!"


To which the only response was, "When were they ever here?"
Hunker'd Down by Bernie at 8:53 AM 1 comment:

Missing Man Violation: how much do we care?

Coach Richt can't make calls to recruits the month of April. On the other hand...we landed the top tailback in the country a month ago. 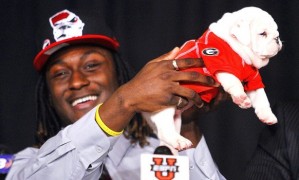 First of all, he knew the stunt was problematic at best. I also think we sign Crowell without him ever taking the jersey and standing in the RB position that January afternoon. However, I'm okay with Richt toeing the line. In fact, in this day and time when it's okay for parents to be paid behind their kid's back...I applaud it. If other programs are going to be able to blatantly defy the rules, I can accept a secondary violation if it helps solidify a dream team member.


Richt's facing a win or else season ahead. He took the high road during Kiffin's brief jaunt through the SEC, racking up secondary violations like they were cheap scratch off lottery tickets. This December Richt watched as one of the Dawgs' biggest rivals received a stay of execution and was allowed to play an ineligible player.


It's the new NCAA and its subsidiary, the SEC. I understand that silly rules like the one Richt broke are there for a reason. But it's been made clear the gray area is vast, as large as the area from West Opelika to Columbus, Ohio. The only given is that any misdeed in Athens will be gone through with a fine toothed comb and dealt with swiftly, harshly.


So I doubt many Dawg fans are barking too much about this latest run in with NCAA compliance. If they are, they just haven't been paying attention. It's obvious Coach Richt has.

Monday's Meatloaf - The Bracketology of Dancing

Today there is something we can say that Tech, Auburn, Bama and Jim Harrick can't...we're dancing baby!


After sweating it out most of the weekend, it turned out that we were a virtual lock since the SEC tourney started. We not only made it in the big dance, but we grabbed a 10 seed to boot. This news upsets Lunardi some analysts as well as Updykes other basketball fans. Leaving Bama at home without a date despite losing to them twice in the last week, is hard for many to fathom.

“Georgia got in easily,” analyst Charles Barkley said on CBS. “I thought Georgia should have been in, but everybody had them last four out or last four in, but nobody had them as a 10.”


But the season didn't start 10 days ago. It started back in November and that's when the Dawgs started working on their resume. While some teams were frantically tying and fiddling with their bow tie this weekend, Coach Fox could point to his RPI and his SOS. There was no need to look in the mirror for one last check.

“This is about a four-month marathon, not a four-day postseason tournament,” Fox said. “I think people forget that.”


The body of work had spoken for itself. Shoes are shined. DJ is plugged in. Raftery's got the onions. Well done Coach Fox. Do us proud! 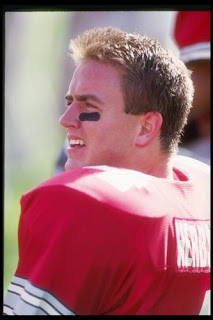 And Knight definitely knows how to swing, if you know what I mean. I'm sure Jay Bilas and Furman Bisher would provide their endorsement. Dickie V too. Terrance Moore I hear is sticking with Mike Vick.


But forget all that Dawgs. Let's get to groovin'.

Dawgs can dance if we want to
We can leave the Tide behind
'Cause your nerds don't dance and if they don't dance
Well their bubble burst this time
I say, we can go to Charlotte
A place where the Bizarro Dawgs we will find
And we can act like we come from the Steg
Leave the real one far behind
And we can dance


That's the end of the meatloaf Reader. Hope it fortifies you on this National Bracket Monday. Remember, if you get a gravy smudge on your printout...you probably don't want to run it through the fax.


Bernie
Hunker'd Down by Bernie at 8:23 AM No comments:

Now that Coach Hewitt has been fired at Georgia Tech, does this officially close the book on the legacy of Dave Braine? You know, the mastermind who engineered the contracts of both Chan Gailey and Paul Hewitt. 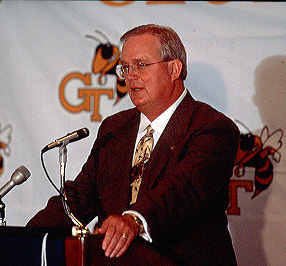 If so, it's an especially sad day to be a Dawg. That was one glorious, craptacular era of engiNerd athletics. Here's Hewitt's parting remarks:


“I’m no longer the coach at Georgia Tech. … I feel very fortunate to have 11 years at Georgia Tech. They’ve been more than fair to me and my family. I wish them all the best. I think Tech is in good hands.”

More than fair indeed. The former coach is still due $7.2 million dollars, unless he feels he owes his former employer a negotiated settlement. When Gailey was fired he still had four years at $1 million remaining and Radakovich honored it.

That's a lot of damn cokes and hotdogs folks! And it puts the dark era of having Goff, Donnan and Jirsa on the payroll post-firing to shame.


I miss the Dave Braine algorithms.
Hunker'd Down by Bernie at 7:09 AM 2 comments: