Again, I'm not gonna go blindly jump into an off season pool of blissfully false hopes. But if Coach Richt is this pissed in the April Bulldog Club meetings....I can't wait for him to get to Atlanta. Ballroom, party of 92,000 please.


Makes me think he's setting the tone for the fans that gather around well brand bars and good BBQ, putting everyone on notice that for better or worse he's not planning on being on the hotseat much longer. What was working ain't working no more. We're stirring up the pot and gonna get a little dirty.*


And again, I welcome the more colorful and direct language. If continually propping the running backs up publicly hasn't been working, by all means let's toss the kid gloves to the corner and get after a little ass in newsprint.


I'm not so naïve to think that CMR doesn't use direct language behind the scenes. But I'm also not so naïve to think that he has used it enough. And he darn damn sure hasn't displayed this side publicly nearly enough. So yeh, it puts a little pep in my step this morning too. It only makes my hunger pangs for September 3rd rumble louder. It makes me ready once again to see a State Trooper fist bump as the visor gets tossed to Sanford's turf! Hellz yeh Señor Cock!


Luckily it is all held in check by this sobering thought: if only he had held his former defensive coordinator to the same standard as he is now holding his running backs to. As the Senator points out against the backdrop of last night's first round draft, we've had some pretty damn good offensive talent. Especially in 2008. What could've been if Martinez and Co.'s nose had been held to the grindstone?


Woulda coulda shoulda, right? I guess the bottomline is that last night in Macon is proof that our coach can evolve. By September's second Saturday we'll know if the team has followed suit.


*by "dirty" I don't mean "Opelika dirty". Just a little foul-mouthed and sour-pussed faced...ornery and not on an even keel.
Hunker'd Down by Bernie at 9:12 AM 11 comments:


Reminds me of the classic line from The Princess Bride...You keep using that word. I do not think it means what you think it means.


I feel for the kid if he's got some personal stuff going on that is complicating his decision making process. For any 18 year old, the decision to go to one college over the others in consideration is enormous and not to be taken lightly.


But yeh, he should shut it down then and get back to the actual word commitment. When he's ready, he'll know. And don't feel too bad for UCF. Can you imagine how Ware's prom prospects felt last month?


On the brighter side....Coach Fox is still in this thing, if he doesn't mind the never ending roller coaster.
Hunker'd Down by Bernie at 6:55 AM 3 comments: 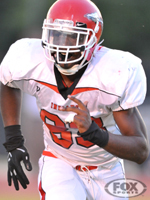 Chad Simmons at DawgPost says that Coach Richt got a big 2012 commitment ($$) this morning from Dodge Co.'s Leonard Floyd. Floyd was also considering Alabama and Florida, although he has long been considered to favor UGA. Ever since he visited a few months ago he's had nothing but praise for Coach Richt, the program and the school as a whole. From the sounds of things, UGAs facilities (both athletic and otherwise around campus) made quite an impression.


Eventually the question becomes where Floyd will line up. Or perhaps more accurately, where he won't line up. He plays both sides for Coach Collins down in Eastman GA; he's a very productive TE and a terror on the defensive line. He could play TE, OLB or DE at Georgia...or all three. My best guess at this point would be at OLB then DE as he gains weight. He's currently listed at 6'5" and 220 lbs.


Regardless, we'll take this in-state star. Welcome to the Dawg Nation!
Hunker'd Down by Bernie at 1:16 PM No comments:

Artie Lynch is often the forgotten man at a position that is especially deep for Georgia. So deep in fact, one player who could start at TE for many teams in the SEC has moved to fullback. 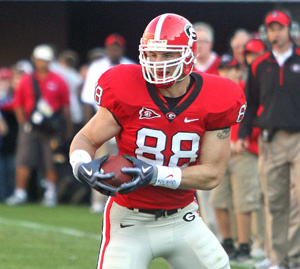 This is a good story on Lynch. It describes him as someone who's been through some difficulties and ultimately chose to move from Massachusetts to Georgia to pursue his academic and athletic goals. More than anything it describes Lynch as devoted to his family and a great person to be around.
If you too are wondering just who this dude is, give the story a read. You won't be disappointed.

I don't see how in the world this actually happens, but Matt Ryan wouldn't be the only person in and around I-285 smiling if it did.


Peter King of Sports Illustrated reports that Atlanta is trying to trade way up to get one of the top two receivers in the draft, Georgia’s A.J. Green or Alabama’s Julio Jones.
Moving up high enough to get Green would seem to be a real long shot for the Falcons, as it would probably require them to get into the Top 5. The Falcons, picking 27th, would have to give up a boatload of picks to move up that high. Jones may be a more realistic target, as he could slip out of the Top 10.
The Falcons trading up high enough to get one of the top receivers seems unlikely to happen, but it would make Matt Ryan a happy man.

The Dawgs got some good relief pitching and timely hitting to beat Tech last night at Turner Field 6-4. And it came on what was already a pretty special night with Johnathan Taylor visiting the Dawgs' dugout for about 4 innings.

It's been a tumultuous season. Good to see the entire team back together, if only for a few innings. And good to get a weekday win, especially over 9th ranked Tech. Of course, it may not be the last time we see them. If the Diamond Dawgs can keep winning weekend series, there stands a pretty good chance we'll be back in Atlanta for an NCAA Regional.
Hunker'd Down by Bernie at 6:24 AM No comments:


Houston tested positive for marijuana at the Combine in February. He'll now wait and see how that affects his stock after being projected as a late first rounder by many. While AJ seems headed to Cincy to join the NFLs worst franchise, Houston seemed to stand a pretty good chance of landing in New England as one of their two first round draft picks.


Then again, the Pats took that Aaron Hernandez joker last year in the draft...albeit, not until the 4th round. I doubt Houston falls that low, but...damn son. Just...damn.

Email ThisBlogThis!Share to TwitterShare to FacebookShare to Pinterest
Dawg Tags: NFL Draft, this rotgut moonshine is making me sick

Receivers - still knocking on the door

If walk-on Taylor Bradberry was the surprise of the spring for Coach Ball, it would seem we're heading for a committee approach to playing time at the receiving position opposite Tavarres King.


None of the wide receivers for Georgia just blew the doors down this spring in the start of the post-A.J. Green era.
The biggest surprise? Well, according to wide receivers coach Tony Ball, it was walk-on Taylor Bradberry. “He made a lot of plays in the spring game and he did that all spring long,” Ball said.
That was no doubt meant as a compliment to Bradberry, but it may have also said something about the rest of Georgia’s receivers this spring.

There's only so many times we can throw to the tight end, right? With Troupe and Wooten sitting out most of the Spring, the others still couldn't step across the threshold and say I got this. Many are wondering who will stop knocking and just step up.


I hope that it's Wooten. But there's reason to believe it may eventually be someone younger.


Redshirt freshman Michael Bennett showed coaches something when the ball wasn’t in his hands. “I felt like he probably demonstrated the most physicality this spring at receiver,” Ball said. “Really tried to be physical and worked extremely hard to get better and prove to the staff that we’ll be able to depend on him and trust him. Really looking forward to big things from Michael.”

Coaches Richt and Bobo love a receiver that can block. Bennett sounds like he's ahead of the curve. And don't forget about Malcolm Mitchell. I'm sure he gets a long look this August as the playmaker we need on the edge.
Hunker'd Down by Bernie at 6:50 AM 2 comments:

"The Florida Way" - a loose interpretation

First off, sorry about not having any meatloaf served up this morning. Easter, family and travel (thankfully) got in the way of blogging this weekend. Hope you all had a great weekend as well.


The question down in Gainesville in the coming weeks...is Will Muschamp's definition of the "Florida Way" different from the coaches who preceded him?


For the third time in his collegiate career and the second time in this calendar year, star player Janoris Jenkins has been arrested. At this point I guess it's safe to say this is a chronic problem.


According to Gainesville police, Jenkins was spotted sitting in a car early Saturday morning smoking what an officer later found to be a marijuana cigar. He's scheduled to appear in court on May 12.

Back on Jan. 22, Jenkins was hit with the same charge, possession of less than 20 grams of marijuana, after Gainesville police officers said they found Jenkins in the bathroom of a nightclub rolling a marijuana cigarette. He accepted a plea deal on that charge.

This is Jenkins' third run-in with the law during his time at Florida. He was arrested and tasered in May 2009 after fighting with five other people despite an officer ordering him to stop. He signed a deferred prosecution agreement, agreeing to probation and community service.

It's obvious that Jenkins has a history of finding trouble off the field. It's just as obvious that he doesn't have one ounce of respect for the "Florida Way" if he was truly sitting in his car in a public parking lot puffing on a blunt a month removed from accepting a plea deal for another marijuana charge.

I guess it's also safe to say that Muschamp's internal discipline is akin to most of the parenting I see in my local WalMart - maybe loud and somewhat disruptive, but largely unsuccessful and easily forgotten.


My prediction is that Jenkins is back in time to intercept a couple Tyler Bray passes on September 17th. Your move Will...prove me wrong.
Hunker'd Down by Bernie at 8:21 AM 7 comments:

Drew went down to Georgia

I look at this picture... 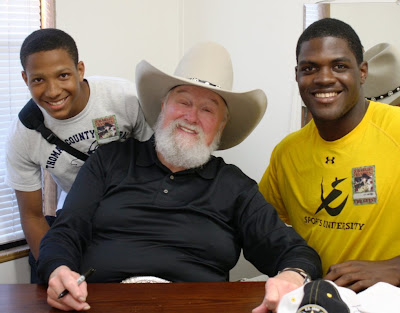 ...and read the story behind it...and several things come to mind. Here's a few:

Seriously, very good for Ray Drew to get that recognition (although I get the impression he's had plenty of experience in the limelight). And how very good of Daniels to take the time to make the evening a little extra special for Drew and his brother.


Maybe next time they can gather around a hickory stump.