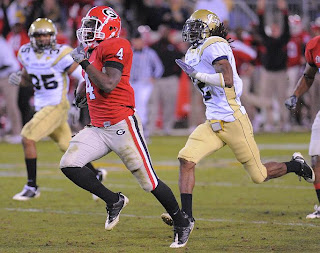 In late November of 2009 two young Georgia tailbacks ran roughshod over a bunch of engiNerds. A year and a half later they're both gone. First Ealey was shown the door and he eventually decided to walk through it. Now Caleb is reportedly ineligible has officially been declared ineligible for the Fall season.


Many will point to the rumors that began in May and say they were right all along. Personally, I continued to point to what I believed would be a great senior season for him. I still say there is a stark difference between Ealey and King. I wanted King on the team this Fall. As Groo points out, our depth is teetering a very thin line and now even more pressure is on a true freshman to take the reins immediately.


In the end however Caleb King dug a deep hole. I believe he wanted desperately to get out of it. He could've left earlier and joined a D2 school to save his eligibility, but chose to stay and fight. I wish him well and hope he gets things back on track.


Looking forward, the King/Ealey Connector is forever closed, practically a one game highlight reel. Now the team must choose a detour and hope the road is long, sustainable...and better paved.
Hunker'd Down by Bernie at 2:53 PM 3 comments:

Actual footage of Washaun Ealey lamenting getting dragged down to the Pit of Despair.

I guess Miracle Max was on vacation when Ealey really needed him.

While I'm not buying into the off season talk of the new strength and conditioning program, I will say the tone is different than the previous few. While some take that as reason to gulp some kool-aid, I would argue that it is mostly to be expected.


But...Fletcher Page sheds some light on Coach T's workouts and their by-products through this interview with Arthur Lynch. While the TE from Massachusetts was facing a redshirt season, Coach Tereshinski approached him and asked if he'd like to kick it up a notch. Lynch agreed and soon found himself with an additional 35 pounds of lean muscle.


So on top of his regular practice and workout schedule Lynch started meeting with Coach T every Friday morning and Sunday afternoon in the old Stegeman Coliseum weight room—a place aptly titled “The Dungeon.”
The nickname is fitting considering the kind of work Coach T cranked up.
“It was a lot of squats,” Lynch recalls. “Cling, squat and press was another one. Really it was just a lot of lifts that were really intense. It’s just intensity, high demand and the demand for your best. He pushed me. He pushed my body to do things it’s never done, and I definitely owe him a lot for that.”
The results were quick to follow. Over the course of the season, Lynch grew to 270 pounds—a lean looking 270 pounds too.
“Oh yeah, by far, you could tell when he was just walking around the campus,” said junior tight end Orson Charles.
“We all noticed it,” linebacker Christian Robinson said. “I know towards the end of the season we’re not able to go every single day and workout. He just seemed to keep getting stronger. He’s hitting you and you’re going back and he was down there (on scout team), but it felt like he should have been on the first string. He’d gotten bigger, stronger, and he was loving it.”

I guess Coach Richt was paying attention while Lynch ran around on the scout team last fall. If you're like me and are feeling more than a little vulnerable with a thin offensive line, you have to feel at least some better with Lynch lining up over one opposing DE and Bruce Figgins in the backfield. Add White at the other end of the line and Charles flexed out and suddenly Bobo has a wealth of options...not to mention Aaron Murray.

I mentioned the other day that a little dissension is okay and understandable. But are we truly ready for what's ahead? As a group and as individuals?


I reflected on those questions personally yesterday. Actually I guess I've been reflecting on them since the 2010 season came to its miserable close. I began to consider what has worked, but more specifically what has not. 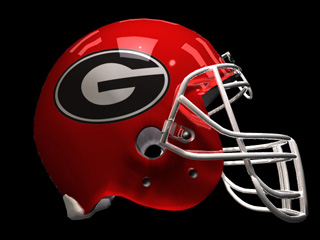 For instance, I tend to do season previews in August. It's mostly a way to fill space leading up to the frenzied first kickoff of the season. But really what do I know? Do I wanna invest in the hype of the off season workouts that were better than last year's which were supposedly smothered in awesome sauce themselves? Then, do I wanna take that investment and suppose which games are gonna be losses and which ones are wins?


I guess the truth is I actually would like to prognosticate some, but the fact is that it hasn't worked. Instead I think I'm going to focus on setting my mind right. If you stuck with me a couple weeks ago you suffered through some bitter memories with me surrounding the Ga/Fla game. And I'm leading up to a big post when we have about 50 days left, so you've been warned...


But my ponderings got me wondering: what are we doing to prepare ourselves for the season? While the team trains and studies is there something we can do beyond twiddling our thumbs? Is there a conditioning program for unsatiated fans suffering through their second consecutive off season of discontent? 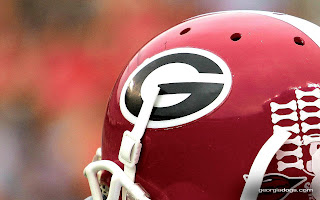 I think there should be, and here's where I'm focused: what makes this season better for you? Is it a number, as in 10 wins? Is it a specific bowl or a certain goal like the SEC Championship game? Or maybe it's something a little more abstract like better fundamentals, better tackling, more disciplined play...? Ugh. That list could go on and on. But you get the idea.


Also, going back to the dissension in nation we should look at what happens when things go really well...or really poorly in September. Will you spend time and energy on I told you so's? If you've been chunking rocks at the Coach Richt bandwagon and we manage to beat Boise State and South Cracky will you continue your assault or reserve judgment until December? Conversely, if you're the most ardent of CMR supporters and we head into the game with Coastal Carolina still looking for the first win...or drive out of Jacksonville with yet another loss, at what point are you unsettled enough to say it's time to part ways?


The college football season is closer to a marathon than a sprint, filled with deep valleys and sharp peaks. We better get ready. Cuz whatever we've been doing hasn't been enough.
Hunker'd Down by Bernie at 8:10 AM 11 comments:

I hope you are enjoying your 4th with family and friends. I had planned a larger post but the WiFi here is as cranky as I am when my grits get cold. But the links below are important enough to share even though I can't embed the video. (h/t Mac)

Thanks to our servicemen and women who helped male this day (and everyday) special for the USA!
Hunker'd Down by Bernie at 12:41 PM 2 comments:

Was going to play golf the other day and had a nice outfit laid out before I went to take a shower. When I went to put them on the wife had decided that the shorts and shirt were to be worn for another occasion. (sidenote: I don't pack a lot of clothes on vacation, especially when we're going to have access to a washer/dryer). So instead I wore my white Georgia golf shirt of course.


At the course I hadn't even made it to the proshop to pay my dues before I had already received a hearty Go Dawgs!! This made me proud to my red and black core, but later the guy who had shouted at me engaged me in a quick conversation at the turn.


He was not in a very positive state of mind about things. That's certainly understandable. After all we did a lot more cowering in the Dawg house last season than stretching the chain, bearing our teeth. But the fan also likened our play to a Sunday School classroom more than a Saturday afternoon on a football field. "I go to church on Sundays. On Saturday I wanna see football!!"


I also understand that. To borrow from a line of Bull Durham, "How'd we ever win six?" We didn't play like we hated our opponents enough. We may have wanted to beat those seven teams but we sure didn't look like we wanted to body slam them to the turf then press our cleats into their throats. 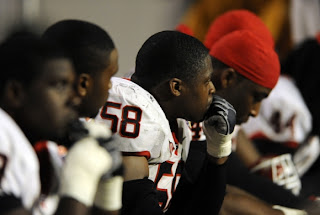 But in speaking to this gentleman (albeit ever so briefly) I also felt like he was taking a jab at Coach Richt that was more than unfair. I expect opposing fans to make a big deal of Richt's Christianity. And clearly this guy has seen all he cares to see of one Mark Richt on Georgia's sideline. But I had to disagree with his overall assessment to some extent. The team lacking the will to completely destroy opponents has nothing to do with the head coach's religion. The problem last season was the coaches wanted to win more than the team, there was a lack of communication and a lack of true leadership.


Of course, as Kit expertly points out this is all just my point of view. My own opinion based on some facts and some supposition. And of course this golf course example involves only two members of the entire fan base. The main point I want to make is this feeling of disarray is only natural. I'm not asking anyone to embrace it. Just accept it as a natural by-product of a losing season and a program we hope is in transition.


If absence makes the heart grow fonder, losing should make the heart hungry as hell. 63 days until we take the floor of the Dome. My fellow Dawg golfer predicts we'll lose but accepted my point that the schedule sets up pretty well for us. He thinks Richt is gone soon. I think he wins enough against this slate to earn a bucket of ice for his seat.


But it's early July. What the hell does anyone really know?