What could possibly be worse than working late on a Friday? Well, gather close and listen up.


I'm a simple man. I don't like french food and would rather young boys with an eye for my girls never darken my doorway. Now, some of you readers probably have some fine young men that are as well mannered as a boy can possibly be. Perhaps they even eat broccoli. Kudos to you and your parenting skill set, I have a beer in my beer fridge with your name on it. I have no real problem with your boy, honestly. I'd just rather not think of dealing with them around my house. Just keep them at your home, away from my gun and we can all continue to get along just swimmingly.


Sure, my girls aren't even out of elementary school yet; they're just beginning to enter into an age group considered "pre-teens". And for the most part they still think of boys as being made from snails, dirt worms and mud. In addition and according to dinner table reports, most of them eat their boogers and fart in public as well. Yet this phenomenon called "pre-teens" is like parenting teenagers while the training wheels are still on. There are no curfews or driving restrictions to argue over. But there is plenty of wardrobe differentiations and truly crappy music to toss household harmony out the window on its nearly deaf ear. Indeed, "pre-teens" are like miniature dobermans with baby teeth. Their bite isn't as painful or as lasting, but it can still scare the hell out of you.


Like a good dad I have paid attention to particular milestones that my children have accomplished as well as ones they are still aiming for. For instance, just last year they took their first steps as toddlers. And on Friday my oldest got her ears pierced. Yes, for those of you without the joys of progeny...it happens that quickly! And despite reminding the eldest that the set-in-stone-preestablished-age-for-getting-ears-pierced-is-TWELVE!! as recently as THURSDAY NIGHT after dinner, there they were when I got home Friday night...waiting on my approval. Her ten year old ears punctured and bruised by some "jeweled" adornment. As if there was anything I could do about it then.


Except threaten her within an inch of her life if she ever blares Miley Montana while arguing with her mother over appropriate clothing for Sunday School. If some part-time employee at the mall can put those damn things in, I'm quite sure I can get them out. 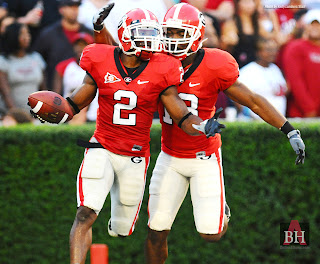 
Maybe I'm not such a bad parent after all. On the rare occasion that we take our kids to McDonalds they at least get the fish. That is fish right? 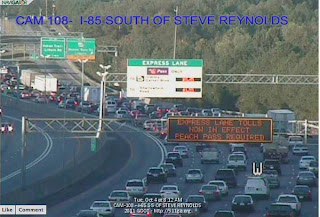 Anyway, it's time for Darren the Intern's weekly report. Last week he installed web cams along I-85 so we could monitor traffic in the not so congested Peach Pass lanes. It never made it to the front page of the AJC or the film at 11, but Governor Deal had an all out hissy fit. Darren even spent a few nights in jail. So this week he delivered his report hand written on toilet paper.

Ok, well. It appears Darren has been tampered with and reprogrammed. But rest assured, if you're willing to pay to use something that used to be free, that lane is open with no waiting.


Speaking of waiting, not much of that left for recruitniks. This time Wednesday we'll be wiping the powered donut sugar from our faces and listening for the fax machine. Stop by tomorrow for a run down of what will be the blog's 4th Annual NSD Liveblog, including how you could win prizes just by visiting. But until then, here's a fork. Your lunch is ready to be pierced.

I'm currently shopping videos of my three year old daughter to Convents around the region in hopes they'll offer her and she can commit before she every gets past 5th grade.

Does she have a profile on Scout or Rivals yet? How is her crayon use? Is she teachable?

Most importantly, start with AwwBarn's nearest convent. I hear their bagman might be back in business. If not, try ClemPson.

LOL!  Another great family story Bernie. As a Dad of two sons, I was very fortunate that my  two closest friends had daughters the same age as mine and they grew up together. From soccer games, watching the Dawgs together, to family vacations, they learned a lot from those gals and are better men for it.

“Note to grown daughters: if your parents taught you to value yourself from cradle to cap and gown, and to gain valuable experience volunteering and working through your tenure in college, now is a good time to thank them. You are far ahead of the curve.”

I am no fan of snails, but butter, garlic, duck fat and Cognac - not to mention pastries are pretty good eats. Just ask Monsieur Tardits.

I feel like mine are ahead of the curve. I just want to keep them there.

Well played. I don't feel as if I would complain about anything Le Sack served.

Well played. I don't feel as if I would complain about anything Le Sack served.