Yesterday I met the Sunseri hire on Rocky Flop with a minimal amount of interest. Then I read Clay Travis' post in response. Wow. 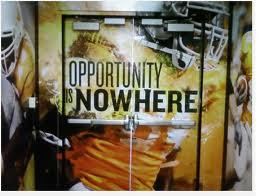 That's why I've consistently argued that Nick Saban is underpaid.
Nick Saban's worth $20 million a year, he's the best at what he does.
But Tennessee's strategy isn't to mortgage the entire state and hire Nick Saban, it's to hire people who are great because of their affiliation with Saban. And you don't beat the champ by hiring the champ's training staff. You don't write "The Sound and the Fury," by stealing away Fauilkner's typist.

Nice analogy. And it's hard not to agree to some extent since the UT football program consistently looks to T-Town for coaching and admin hires that are at best a reach. That being said (and I admit that I didn't follow the hiring process to replace Wilcox), I don't think Sunseri was the first choice.


Bonus thought - it's a fairly large assumption, but I'm guessing Sunseri will run a 3-4. Dooley supposedly needs 8+ wins to survive the hoe down. Is that even possible with their personnel with merely weeks to implement a new defensive scheme?
Hunker'd Down by Bernie at 5:26 AM

There was an awful lot of talk about Shannon going to Knoxvegas.  Sunseri kinda reminds me of our Kines hire...good position coach, lot of passion  but maybe not a DC? Sunseri  had the "Assistant Head Coach title at Alabama. I've often wondered if that wasn't a way to reward good position coaches that don't achieve the coordinator promotion.  The Vol Nation sure is pumped up. My Vol fan neighbor is walking his silly hound dog through the neighborhood again and has it dressed in the orange UT sweater. The Molly Dawg would never wear a sweater.... no matter the weather! Sweaters are reserved for lap dogs.
I don't see more than 2 wins in the SEC 2012 season for the Hillbillies.  CTG will be 3-0 against them after the game between the hedges. And since CTG has set the timeline for a D turnaround when changing to the 3-4,  it allows the UT AD to hold on to SOD through the 2013 season.
They did get the verbal from the Jr College kid to play the nose! Meh! Wishful thinking on their part.

I don't think he survives next season.