Ok, I promised this a couple weeks ago. Ron sent me enough old newsprint to open my own Dawg Smithsonian. I needed something to do with it. I simply must share it with the world.


First, I needed a name for these posts. On twitter Ron is solely responsible for the hashtag #GATA. Well, almost solely. So this is both a tribute to him as well as something y'all can recognize immediately from the title going forward as I add to the museum, hopefully each week.


Next I had to decide how to go about the project. My first thought was chronologically. But in the end I just wanted to pick and choose as certain pictures and stories caught my eye. And with all the talk about Herschel recently...and you know, not to mention the fact that he was a pretty good player...I thought there's not really a better place to start. 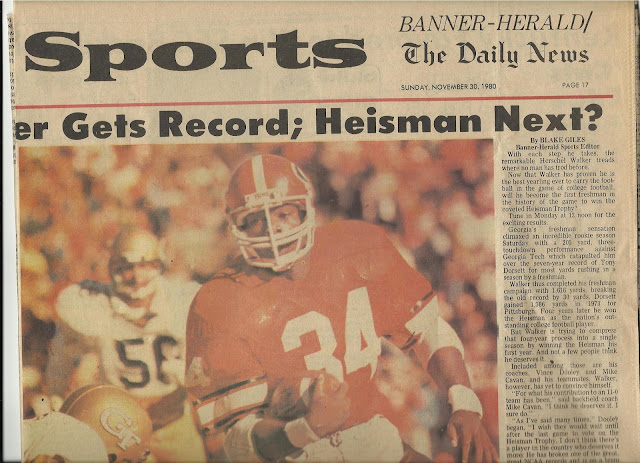 Of course, despite being the best college football player in the nation Herschel would not take home the Heisman in 1980. He finished third behind George Rogers and Hugh Green. The Georgia tailback sensation was clearly penalized for not being a senior, something he could not help anymore than he could help the fact that Bill Bates got in his way up in Knoxville. For more on that subject you can probably do no better than T Kyle King's explanation for just how egregious was the hosing that Herschel received.

Back to the historical clipping, you oldtimers probably remember Coach Mike Cavan was  the coach in charge of recruiting Herschel as well as his position coach in Athens. In the article by ABH Sports Editor Blake Giles there's a quote from Cavan that pretty much sums up the 1980 season as well as how those in Silver Britches felt about #34's Heisman résumé.

Well, in the end the trophy came a couple years later. But looking back what really stands out about this inaugural addition to the GATArchives is that Herschel Walker finished his freshman campaign with a bang by running all over the Yellow Jackets and right by Tony Dorsett in the record book. Then he readied himself for a National Championship game and a perfect 12-0 season.

GATA Herschel. Damn Good Dawg!
Hunker'd Down by Bernie at 6:33 AM

Bernie, truly I have no words to describe the feeling I have at this moment.A huge H/T from the Dawg Pound in the Great Beyond from my father to you.We knew that we were 'handing off' these into the right hands.As my daddy sits upon my shoulder and reads along,he totally agrees when I say you are a "Damn Good Dawg!" Excuse me,for the tears are flowing...GATA and Thank You Bernie!

Oh boy. This gets me crazy excited. About the only way to keep sane during offseasons is to reminisce on the past greats, legends and memorable plays. Nice wrapup of a great game and a pic of 34 is always a welcome sight. GATA indeed.