The changing landscape of Georgia's recruiting

The more things change the more they stay the same. Pennington says the recruiting trail in Georgia is about to get a lot more crowded now that Georgia State is moving to D-1 and Georgia Southern is all in as well, not to mention the fact that the SEC is watered down bigger. And Mr. SEC makes a strong comparison with the state of Florida which has more than triple the FBS schools than Georgia currently. It all begs the question:

Should Georgia fans (and more specifically the coaches)
be concerned about this new competition for signatures? 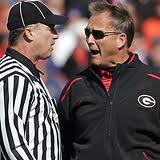 The short answer is an obvious yes. Georgia is talent rich and has long had pilferers from across the borders. Add to that rival FBS programs from within and it only makes the task of recruiting the best and most talented tougher. Recruiting is partly about opportunity. Once Georgia Southern and Georgia State are in the same division as Tech and Georgia it makes for a more somewhat even playing field between the four programs.


But I would take it a step further, at least as a Georgia fan. I look at this short-term and long-term because while recruiting is about opportunity it's also about relationships. If all other things are considered equal by 5-star John Doe or even his brother Joe 3-star, he's going to choose the coaching staff he's most comfortable with as a player, person.


Mark Richt is a master at relationships. And he has one of the hottest recruiters in the country on his staff with Grantham. Couple that with the magic that Bobo and McClendon perform and they are going to do just fine.


So the truth is that this is more of a worry long-term than short-term. However, if this were happening a couple years ago I would be more worried in the now than the later. But something's changed in the coaching staff on the recruiting trail the last couple years. That "dream team" was just a low rent harbinger. There's a lot of energy in the staff and it's really translating to the top high schoolers in the state and beyond. And you can't dismiss the fact that Richt and his staff hold the tv exposure and conference prestige cards over its in state competitors, as well as the "down the road" card over anyone that comes over Steve Spurrier the pilferers.


In the end, the landscape is indeed changing. Georgia will have to change with it. Luckily it will be a much bigger adjustment for its competitors than it will for Richt's staff.
Hunker'd Down by Bernie at 7:13 AM