Monday's Meatloaf - a TON of stupid, and posts

Like any parent I put my kids first. Nothing against yours, it's just that mine are smarter and better looking. Plus you know, that whole genetics thing. Sorry.


So a couple weeks ago whilst vacating, this happened...

The quizzical stare I got in return was interrupted by a cannonball back into the pool. I didn't even get a chance to ask him if cheese is made of snow. Later my youngest daughter had a run in with an unidentified pre-pubescent engiNerd while we were in the middle of an intense game of beach paddle ball. I had made a nice alley shot that was unfortunately ruled out as the ball rolled down the beach towards another umbrella and set of chairs.


I watched for my darlin's reaction to whatever this kid was saying to her. She simply moseyed on back to the "court". Not much later the lil brat decided to interrupt our game by shouting to me that he told her "Don't let a Georgia Bulldog beat you." Oh...it was on now. I quickly asked him who it was he proudly cheered for in the Fall. This beach seemed mostly populated by northerners from places with an abundance of "O's" in their names. But I figured this kid must be a Gamechicken not yet castrated. I was ready to do the honors and show my little angel that Dawgs don't back down.


But when the kid said Georgia Tech, I simply laughed. The tension in my shoulders eased and I put my hand on my red and back t-shirt as I said, "Tech?!? Well you should know all about getting beat." Then we quickly went back to our game, as I gathered his mom was less than thrilled with the comment.


However, if you raise your kid to be that stupid bold, natural consequences are unavoidable. 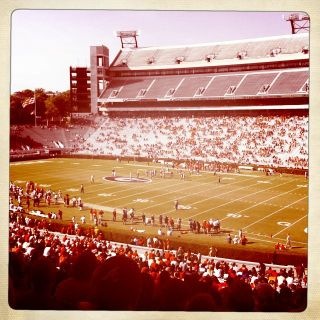 Today's Ingredients
Appreciate all the positive responses to the GATArchives. With the help of Dawg19 this week, we'll stay stuck in 1984 with this week's edition and look at how the spring game looked different back then.

It also just happens that my 2000th post here at Bernie's Dawg Blawg was that look back the 1984 Clemson game and the Danny Ford "confrontation". That may be a figurative TON of posts, but I've enjoyed each one. And I look forward to the future weight of the next TON. Y'all are great readers and I dig the way you click. Thanks for taking part in this little milestone with me.

That being said, I know some of you are probably about to go into hibernation. Spring practice is over. News will all but drip to a complete stop. If you unplug, I hope you bookmark my little spot here for when you arise from your deep slumber this summer. Or if you are a glutton for cyber-punishment, I'll still be pecking away at the keyboard here. Keep stopping by as you see fit. Either way you may be a part of the next milestone as we near the millionth page view at BDB.

At this rate I might catch The Senator by the time my great-grandkids are old enough to type the word Google. You know, assuming his blog eventually runs out of room on the innerwebs. Until then Reader, here's your fork. Dig in!

I'm sure that if Parker signs with the Dawgs, everyone can wait until the Buffalo game to see you in that dress Bernie.

Haha! Way to put that little Techie in his place. He should learn to deal with disappointment early as there will be much of it in his future as a North Ave. fan.

I know my readers aren't that patient. And I would NEVER think about photoshopping my head onto a picture of a dress.

I'm here to serve. What can I say.