With the 2012 NFL Draft in the books, many analysts are already looking at who might crack the top spots in next year's draft. Naturally a name that is going to keep coming up is Georgia's Jarvis Jones.


Even though he's still not a lock to leave campus early (he's a RS Junior this season), many feel he could be the best defensive player potentially available for NFL teams next year. 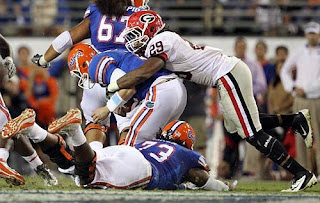 The 2011 All-American is listed as the top outside linebacker prospect by Chad Reuter of the NFL Network.
Jones is the No. 4 overall prospect behind Southern California quarterback Matt Barkley, South Carolina running back Marcus Lattimore and Southern California receiver Robert Woods on a top 30 list by Bucky Brooks of NFL.com.
“Jones is the most dynamic pass rusher in college football,” Brooks writes. “He possesses explosive first-step quickness and burst, and flashes the balance and body control needed to blow past blockers around the corner. While he is still learning the finer points of the position in pass coverage, Jones’ ability to completely dominate the game as a pass rusher makes him a valued commodity in the eyes of evaluators.”
FoxSports.com’s Peter Schrager also mentions Jones in this video clip of the elite prospects for 2013. He says that Jones would have been a first-round pick if he left after last season.
Of course, Jones didn’t leave after making a decision during the season that he wasn’t even considering going.
During spring ball, he even talked like it wasn’t a lock he was gone after next season when he was discussing the outside linebackers.
“We’re young, man, we’re really young,” Jones said. “I’ve still got this year and next year left. If you look at it as a whole, we’re really young.”