It's kicked into high gear.

Mitchell, Georgia’s leader in receiving yards per game last year, will be playing cornerback for the Bulldogs depleted secondary this fall. He still can be a weapon in the passing game, too. 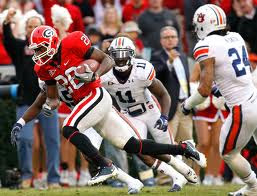 “He’s a very good football player obviously as an offensive player,” coach Mark Richt said. “He may be just as good or better on defense. We’re going to have our first true two-way player. (Brandon) Boykin was a two-way player and Branden Smith was, but they really couldn’t run every single play in the offensive system. Malcolm will know every play offensively. He’ll know every defense defensively so he’ll have a chance to play a lot of football for us.”

In all seriousness, don't discount that "first true two-way player" under Richt quote. There's a lot to that. I would imagine the head guy is carrying at least a few ounces of regret at not using Boykin more offensively. But the larger point is that Mitchell has something working in his favor that even the great Champ Bailey didn't: he has all of the offensive playbook in his working knowledge already. It will be easier to become a "true two-way player" by adding a defensive huddle as opposed to vice versa.


It's a point I tried to make earlier in the spring. The defensive side will be an easier adjustment at this point in Mitchell's development. Once the suspensions are over the coaches should have a clear idea of the best way to use him. The fact that he's only grasped parts of the offensive playbook won't get in the way like it did Boykin and Champ*.


Bonus reading: HERE I looked at Champ's numbers and projected onto Mitchell a bit.


*the Branden Smith side of that debate adds to it the "nuances" of managing a roster with two #1's on it. That's something we've delved into before. So I'm not dismissing Smith as part of the discussion. Just avoiding getting sidetracked by the brain numbing decision to let two explosive players wear the same number.
Hunker'd Down by Bernie at 5:13 AM

One of Richt's many shortcomings is his inability to effectively utilize the players at his disposal. Look no further than Richard Samuel. Boykin and Smith were wasted talents in Athens. Remember Bruce Thorton? I have zero faith in Richt to properly manage Malcolm. The learning curve in college football is much greater than in high school. I look for Mitchell to struggle at DB early and often. Once again we see the effects of Undersigning in Athens.

You hit on a point I failed to. I've been very optimistic about MM's outlook at defensive back. But you're right that the track record in the Richt era hasn't been good. Which leads me to think back to FSU and whether they had any two-way players while CMR was in Tallahassee. I can't think of any really. Deion didn't really play offense, did he?

Back in Athens, part of the reason I'm more optimistic with Mitchell even after examples like Boykin and Samuel is that I trust Lakatos more than Martinez. Hope that doesn't come back to bite me. But our DB's are vastly improved compared to what we were seeing pre-Grantham.