Around the Tailgate: Tailback Who?

So to continue the chain...yesterday was Aaron Murray's turn under the microscope, and the day before was the 2012 schedule. Today we talk Crowell and his running mates. Birds are on the grill and the beer's in the cooler. Bring a chair on over.


Joe Waterloo - I think barring injury Crowell will be the starting running back at the start and end of the season.  I don't say that as a knock on him for being banged up last year.  In a lot of ways he probably got a bad rap for being injury prone when in reality an ankle injury to a running back in the middle of the season rarely gets a chance to heal properly.  And running against SEC defenses with a bad leg isn't simply a matter of toughing it out.  Lost in all the emotion of Crowell's "second half collapse" was just how good he looked in the first half of the season. He looked like a legitimate SEC back who was a threat running or receiving.  If either of the incoming freshman are able to unseat him it's most likely because they are bigtime playmakers. Crowell got a lot of criticism last year for needing to grow up, but which of us didn't our freshman year in college?  If he matured at all and is 100% I think we are in really good hands.


AthensHomerDawg - Hard to replace a RB with as much press and promise as Crowell. It's a big jump from HS to college. 850 yards is a lot of ground when you consider how often he was absent from the huddle.  Hope he stays healthy.   If he can, we will see a lot of him.


Smoke Wagon - Good question.  The good news is that we have promising options.  I am guessing Ken Malcome in first game.  I was as down on Crowell's attitude and heart as anyone last year, but Malcome was nowhere to be found early in his career as well.  My point is that if Malcome can turn around, why can't Crowell?  I still think Crowell has huge upside.  I am optimistic that Crowell will have enough of a mental turn around that he is starting early in season.  If he is and is still starting at end of season, then we have probably done well.  Also excited about Marshall and Gurley.   Samuel played hard at Jax, but glad we have several better options this year.  Unless we have significant injuries, the competition between Crowell, Malcome, Marshall, and Gurley should be awesome and productive.


Da Mighty Fred - Crowell will start at Buffalo (although Marshall had, reportedly, a great spring).  No disrespect to the other guys, but I hope he stays the starter.  Crowell has incredible talent, and our coaching staff oughta be able to get his head screwed on straight.  Crowell got freshman of the year with his head wrong. Can you imagine what the right attitude would do for the guy?
Plus, having Marshall and Gurley waiting in the wings may provide the needed emphasis.Still, it's a long season and we're pretty deep.  Look at what happened last year- it may come down to who's left at the end of the season.

The Wrangler - I believe that Crowell will be the starter on opening day.  Reports are that he has really “grown up” and taken responsibility this offseason.  He is a real talent that just has a hard time getting out of his own way sometimes.    With another year in the system and good offseason conditioning, the starting job is his to lose.  With the talent at the position, Crowell had better bring his “A” game, as I expect he will have a short leash this year.  Malcome, Marshall, and Gurley will be hungry and will probably see significant reps regardless of who is named the starter.  Richt and Bobo have proven that they prefer the tailback-by-committee approach.  I just hope that they will ride the hot hand this year and not substitute for the sake of substitution. 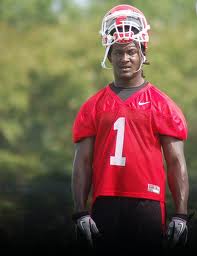 I questioned Crowell’s heart in a lot of games last year.  It was so disappointing to see him tap his helmet after every other play.  I know that he had some injuries, so I am hoping the offseason will give him time to get healthy and show the nation what he is capable of.  I really believe he is one of the more talented backs in the conference if he can just keep his head on straight.  He needs the respect of the O-line – this seemed to be lacking late last year.  For the future of the team, we need him to perform at a high level so that Marshall or Gurley can be red-shirted.  Also key to one of them red-shirting will be the performance of Ken “Boo” Malcome – I really loved the heart he showed in the dome last year.

If Crowell stays healthy, he will be the starter in the dome in December.

Namaman - I think Crowell will be there at the start and end of the season.  Deep down, I have to believe that last season, and this year's running back class, were a wake-up call for Isaiah.  He has had a year and a full off season to put on some bulk and get prepared for playing in the SEC.  That will help him to get rid of his chandelier tendencies and show more than a flash of what we know he can be...

Parting shots: Shove Richt's "depth chart" in my face all you want, this job is Crowell's to lose. These guys are right about his potential and ability. If all goes well the bigger adjustment might be on the coaches who go from having one of the thinnest positions on the 2011 team become one of the deepest, talent-wise. Like The Wrangler said, I hope they find a hot hand each and every game and feed it. If that's Crowell, great. If it's not, then at least it won't be a running back who's also a card carrying member of the Lollipop Guild.

Now, your turn Reader. How do you see the tailback position stacking up this season? And tune in tomorrow when we go national with our own individual post season planning.

Crowell has to get it done this year. I think he gets the nod opening day with a nice balance of Boo Malcome. Keith Marshall seems special to me w/o ever seeing him run the rock. Gurley gets the red-shirt if if the 0ther 3 + Richard Samuel get it done. I see a vast improvement in our backfield for the upcoming season. Health is the main issue but, we have options this year. Bold prediction: Crowell (if healthy) rushes for 1250+ yds. this season.

My choice is Boo Malcome. No knock on IC he's a real good back but with alll this attention he's geting I think they are going to key in on him. With Ken he has the build and strength torun it even if they key on him or our o-line isn't as good as we hope it is. I feel like Ken is out of the spotlight and isn't getting the love that he should be.

i think the returning backs (Crowell/Samuel/Malcome) have 6 td's combined. not productive. Crowell, my goodness, kid couldn't score but 1 td in his last 7 games, and only went for 100 yards once in his last 8 games.