Another award for Kyle Maynard

I'm not much for award shows. But I saw this come across the wire last night. We've followed Kyle's achievements here for awhile. Glad to see him again recognized for his achievements so that he can continue to spread his message to millions of people.


I mean, the guy climbed Mt. Kilimanjaro. Who else could top that for an ESPY?

Kyle Maynard -- the Collins Hill graduate and congenital quadruple amputee -- has won another ESPY, an award given out annually by ESPN for sports excellence.
#Maynard, who won the same award in 2004, won in the "best male athlete with a disability" category on Wednesday night in Los Angeles.
#The award came after his crawling up Africa's Mt. Kilimanjaro in January with a team of wounded veterans, friends and professional climbers.
#Maynard tweeted shortly after winning the award on his @kylemaynard Twitter account.
#"WE JUST WON THE ESPY!!!!!! Thank you so much!!! You helped make it happen!!!"
#His summit at Kilimanjaro's 19,341-foot peak was the first by anyone crawling up the mountain, and likely the first period by a quadruple amputee. 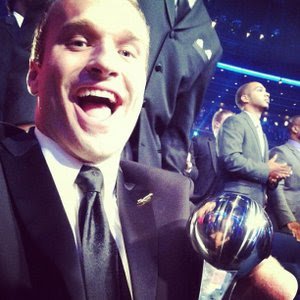 Bought the book "No Excuses" when the boys were struggling some in HS sports. Helped them through a tough season.