Around the Tailgate: Malcolm Mitchell, pros and cons

It's been the hot button issue all off season. People are either excited about Malcolm Mitchell playing defense, or upset that Bobo's lost his top weapon of downfield destruction. Always ready to chime in, my guys weigh in on Georgia's newest dual threat. 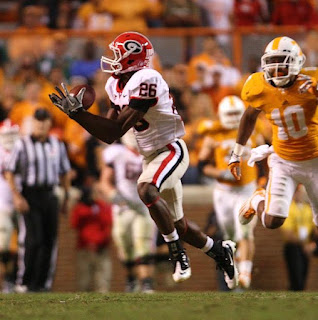 The hottest off season topic has been Malcolm Mitchell's duality. Bobo and Grantham are fussing over him like the last piece of pie in grandma's kitchen. How do you think his season will play out? What do you find exciting about him playing both sides? What are your worries?

Joe Waterloo - I don't know enough to have an intelligent opinion on Malcolm Mitchell, but in the name of journalism (or whatever this blog classifies as) I'll respond anyway. My biggest concern with Mitchell is how will UGA use him and does the coaching staff even really know yet.  Is he primarily a DB this year or are they hoping to move him back to offense when our secondary is full strength?  Will he being doing a 50/50 split on both sides or just the occassional play on  offense.  He was our best offensive weapon last year, so you hate to lose that.  But if he really is a better defender than receiver then make the move and stick with it.  The one thing I'm think I know is that he isn't Champ Bailey, but that's the parallel everyone is making and it could be way too much pressure on him.  Bailey was so good that when he got on offense for a handful of plays it didn't matter that the defense knew it was going to him.  As good as he is, I don't think Mitchell is that explosive and no UGA fan can say with a straight face that they feel confident Bobo can get creative touches for him.  My fear is our coaching staff is going to see how the season unfolds and move Mitchell accordingly.  That may give him the chance to be good on both sides of the ball but it greatly diminishes his chances to be great on one side of it.

The Wrangler - As long as the rest of the receiving corps stays healthy, I would like to see Mitchell focus on the defensive side of the ball.  We have more quality depth at receiver than at corner, so we definitely need him in coverage.  I have mixed emotions about guys playing both ways.  I feel that if we recruit and develop talent the way we should, we shouldn’t need to play a guy both ways.  On the other hand, sometimes a special talent comes to Athens (Champ Bailey), and you have to find a way to get the ball in his hands.  Time will tell if Mitchell is that type of talent.  He definitely started his career off hot.

Namaman - I think we are solid at WR, so if he is going to help us as much on the defensive side as we keep hearing, I am all for him being in a Champ Bailey-esque type of role.  I think he can come in and make a big play on offense every now and then, or at least provide enough of a distraction to get King, Brown and Company the ball in some open space. 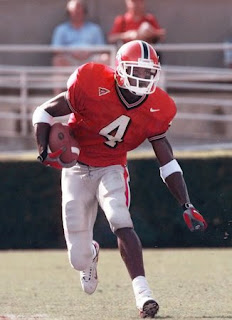 SmokeWagon - I am in full support of the dual responsibilities and I do not understand why we only do it in unique circumstances. We obviously need MM on D with the early suspensions, but where he spends most of his time later in the season will depend on the both his performance on D as well as the performance of other DB’s and WR’s.  When suspensions are over, my gut feeling is that our normal starting DB’s are slightly better than our normal starting WR’s, so I think he will find his way back to predominantly offense.  However, having MM cross trained for both sides is a huge benefit and insurance policy for an injury (or suspension) on either side of the ball.  We probably have more depth at receiver, but MM can still provide depth at DB while providing production at WR.  I was watching the 96 Auburn game the other night on SEC classics and I remembered that Donnan had benched Robert Edwards for recent fumble problems. While that turned out to be a blessing when his legs were fresh in the four overtimes, I was thinking “he is arguably the best athlete on the team by most accounts, so if he is fumbling too much to carry the ball, couldn’t he be contributing by playing DB or LB on defense?”.  He had already proven his freshman year that he was All SEC caliber DB.  I understand that playbooks are not as simple as they once were, but in reality learning the responsibilities of at least two positions is not too much to ask of a kid that has been in the program for at least a year.  The two positions don’t have to be on different sides of the ball.  I am also very happy that Grantham is cross training several players for multiple positions.  It not only provides more instant depth, but quality depth with typically superior athletes (that were good enough to start at another position).  I know there is a difference between cross training at two positions and actually playing two positions when it comes to endurance – particularly if the two positions are on opposite sides of the ball.  However, it is clearly possible for a player to excel on both sides and still be able to perform at a high level on both sides if he is training for it.

I am excited about seeing MM’s dual threat.  I am not expecting him to be Champ Bailey on defense, but I look back at Champ as one of my favorite all time dawgs and wonder why we aren’t doing that more often.  Even Hines Ward’s UGA career is held in much higher regard due to his ability to play multiple positions even though they were all on offense.  Fans always seem to look back fondly on dual threat players.  I would like to see some JHC on O and D as well.

I have no worries about this scenario (MM playing dual threat).  Some would argue that when players have fatigue, they are more prone to injury, but that really doesn’t have to relate to which side of the ball they were playing on to get that fatigue.  For example, if MM’s body will allow him to play 65 plays in a healthy fashion, I think those 65 plays should be at the position he is needed most for those 65 plays -  some may be on offense and some may be on defense.

AthensHomerDawg - He did well last season and things are looking up for another record year. It is rare a player can make a BIG impact on both side of the ball. He is special. He may indeed have enough game. Champ only comes by so often so I don't want to expect too much.

No final thought provoking summary on this. I've said enough here...and here. I will add however that many people see this as a reactive issue by Coach Richt. But within hours of the Outback Bowl loss it was Mitchell who approached Richt about the opportunity, well before any downtown domestic citations and Alabama traffic stops.