Around the Tailgate - Mizzou, that's who

The trip out west is shaping up as one of the biggest, if not THE biggest, game of the season. And it is chock full of intriguing story lines. James Franklin's shoulder...Georgia's potential suspensions...first SEC game at Faurot...a top SEC defense against a (former) Big 12 offense...

So today we look at the September 8th matchup.

Last time I asked about the biggest game on the schedule. Opinions were fairly divided. But with Missouri just a couple weeks out now, let's focus on them. How do you feel about the SEC opener? Do you think the Tigers are ready for SEC ball?

Joe Waterloo - If UGA had it's full assortment of DB's I wouldn't give Mizzu much of a chance in the SEC opener.  But when you factor in all those guys (most likely being out) the game is a concern.  With our offensive lines issues and growing pains that will follow I'm not sure we are in a position to get into a high scoring game.  As supposedly great as our defense was we still lost 4 games last year and all had more than 30 points scored on us. I don't feel good if we have to go into Mizzu and score that much.  In reality we should be a signifcantly better team than Mizzu, but we don't have the benefit of them being worn down by an SEC slate and we have a tendency to start slow.  I just hope we aren't trying to kick a field goal at the end to win.

The Wrangler - I think that UGA will get Missouri’s best effort on September 8.  It is their first SEC game and their first chance to show that they belong and can win in the best conference in college football.  If UGA can survive the initial excitement and adrenaline that will be present in Columbia, they should be able to pull away in the 2nd half.  Missouri has a talented team, but I don’t think they are ready for the big time yet.  This UGA team has a goal of a National Championship, and I don’t think they will look past Missouri.  I am trying not to get too cocky – this game reminds me a lot of the OK State game, and we all know how that turned out.

Namaman - I still think Missouri is the biggest game right now.  We have to be ready for their offense with a depleted secondary.  I just am keeping the faith that our front 7 will be able to get to the QB before he can do much damage. We finish that drill and ColaEast looms large...

Smoke Wagon - Like with so many other games, I think it will come down to some early big plays that might spur some confidence in either team.  Across the board, the dawgs should have a higher talent level, but we are not good enough to completely out-class them.  If the Tigers are able to stick around a little while and make a couple of big plays like a long yardage touchdown, kick return, or a turnover taken to the house, the crowd environment could be enough to put them over the top.  I think they can match up with any SEC school for a game or two.  However, I think by the end the SEC slate, they will understand and appreciate the wear and tear from playing against SEC defenses week in and week out.  I am hoping that the Tigers are overwhelmed by the dawgs front seven on defense.  If not, we may be in for a long day.

I think the crowd will be excited and put on a good show.   They will feel they have something to prove to show they belong in the SEC.  I am looking forward to experiencing the environment.  I wish we were taking the whole Redcoat Band.  I hope their fans are not as nice as the folks at Oklahoma State.  OSU fans were a little too nice to us as they dusted off our hats and sent us on our way.  In the end, I am anticipating an awesome atmosphere with Georgia winning by 10…… However, I thought we were going to beat OSU and Boise St. in recent big early season non-conference games. 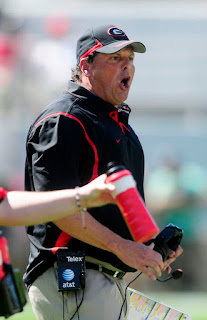 AthensHomerDawg - In the last five years the Tigers have managed 3 ten win seasons sandwiched around some 8 win seasons. They can compete in their conference. They have a load this year with Georgia, Alabama, uSC. That is a lot of good defense right there. They suffer through the same early season dog day lethargy as our own Bulldogs. Last year their second game was with a 6-7 Arizona State and they lost. They will be playing at home at night and I think they will bring their  Big 12 style A game. But they are not in Kansas anymore. They are in big boy college football conference. They will be trying to score on a Coach Todd Damn Grantham's defense.

Final thought. I think Joe's right about the DB's. If we were to have Rambo back there it would help an already depleted unit that will be missing a starter. I'd feel a lot better if Commings were making the trip. But if our secondary can keep their targets covered downfield long enough and be ready for their offensive assault, then there's no way James Franklin will have enough time against our front seven. More on this game next week. I can't wait.

Monday - the tailback situation
Tuesday - offensive line
Hunker'd Down by Bernie at 8:35 AM