So Georgia will start its 2012 campaign ranked sixth in both polls. The teams ahead of us are LSU, Bama, USC, Oklahoma, and Oregon. Teams rounding out the top ten behind us are FSU, Michigan, South Carolina, and Arkansas. So at the quick glance, we're only guaranteed to play one top ten team. Which makes the game in ColaEast even bigger.

Why are we ranked so high? Could be any one or a combination of many factors, most notably: 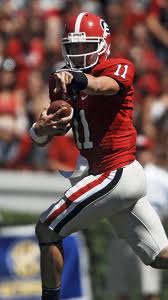 More importantly, how do we hold onto the upper echelon status? That has to start with Murray. I'll focus in a little deeper later this week, but if Murray has gained valuable experience from the Manning camp and learned from his past mistakes then we should see a lot less of the incredibly awful bad decisions in the heat of the moment. Basically, as nice as the 35 TDs were last season, I'd love to see more of him chucking it into the stands.

Also, quality depth (especially along the offensive front) has to be built. And quickly. A depleted roster nearing FCS levels isn't going to hurt until there's a line for the training table.

Beyond that I would add avoid having to "love" players into partial and full game suspensions, kicking teams in the chin when you have them down and a couple (near or in the vicinity of) 1000 yard rushers. Those things give us more than a fighting chance.

To finish this post off, should a gun be held to my head and I were forced to cast a vote in August instead of waiting until October when it is a more reasonable practice, I would put us closer to the Arkansas, West VA, Wisconsin grouping. So somewhere south of 9th and north of 13th. Hopefully I'll feel even better once it's time to vote in the Mumme Poll.