Let's look at the two positions that are going to help keep those safeties and linebackers from cheating towards the alleys of DickSamIV/Boo/Marshall/Gurley. First, some video of one of yesterday's drills.

via 247SportsStudio
Hard to tell exactly which quarterback is throwing each rep, but the receiver sequence rolls along like this: Marlon (catch), Bennett (catch), Conley (through his hands), Scott-Wesley (off the finger tips), Michael Erdman (catch), Taylor Bradberry (catch), Conley again (underthrown) and Rhett McGowan (catch).

The wide receiver position should have Aaron Murray licking his chops, even on plays when Malcolm Mitchell is on the sideline. Conley and Scott-Wesley have terrific breakaway potential to compliment Tavarres King, Marlon Brown and Michael Bennett. And we recently learned that Conley has been working out wide as well as in the slot, which means you could see King, Conley and Bennett on the field together.

In short, gone are the days of waiting for Wooten and Brown to step up. They either do or someone else is ready to fill their spot.

Some questions at WR: 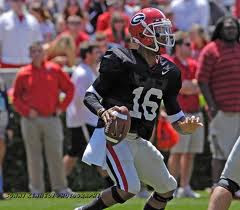 On the surface the quarterback position would seem low on intrigue: a third year starter atop the depth chart with both young and experienced arms behind him. However, the what if's? add plenty of curiosity to the mix. Murray's been known to use his feet some, and he has a young line in front of him. There is always the possibility of a much needed arm off the bench.

This is a topic that Hutson Mason himself describes as "difficult" ($). So here are some questions to put things in perspective:
Ifs and buts...candy and nuts. What it boils down to is that we have a second string quarterback who has a junior emergency quarterback that's either ahead of him or just behind him on the depth chart. Definitely a tough situation for the coaches and players to balance and handle perfectly.

The point right now is that the signal caller and receiving positions are a strength for the Georgia Bulldogs. If the line shapes up like I think they eventually will, it could be a very merry Christmas!
Hunker'd Down by Bernie at 6:32 AM