To quote Mark Richt - "Back then I was scared to death of [Coach Schnellenberger]. … He was a scary guy."

Owls are just gators with feathers
I hate Florida. When you hear someone say "Beat the rush, hate Florida early", they aren't referring to me. Cuz my ass is always first in line. If you're behind me I'm really glad you're there. But if you're at the back of the line I might call into question your devotion to the cause.

"But Bernie, it's just Florida Atlantic. They're new to D1 football. Boca is no where near Gainesville. They're good people that just want their L and a fat check."

I don't give a shit where Boca is. It's not in Georgia and their dirt ain't red. It's sand! Besides, you sound like what I imagine an Arkansas fan sounded like this time last week talking about a directional Weesiana school. You know how to spell Florida gators? Right. Now, you know what the first seven letters are in FAU's name? Right. Do you also read Michael Crichton? Or for you gator fans that stumble upon this, did you see that movie picture with them there giant lizards? Well, what do birds come from? Eggs. Of course. And an owl is a bird. And you know what else comes from eggs?

Right, a gator! You can dress a florida football fan up in feathers and make it woot! woot! all you want. It doesn't change the fact that what we're getting tomorrow is something that descended from the Mesozoic era that likely drives a hand painted 1973 Dodge Dart and definitely believes college football was invented sometime after the Reagan administration.

So by all means, welcome them all you want. Hug em. Pat em on their scaly back. Give em a big ol' fat bankroll just for showing up and being able to breath through their mouths on dry land. But don't count on me to feel sorry for their ass when they get KTFO by Shawn Williams.

Carl? As in Spackler?
There have been two (2...dos!) coaches in the history of Florida Atlantic tackle football. That fact is recent news to me. I saw FAU on the schedule and immediately thought epic moustache, pipe in mouth and fiber bran for breakfast. Dry. No milk, because milk is for women. And babies who don't know how to get in a three point stance yet. I thought we'd get to see the guy that makes that Dos Equis dude look like hispanic ice dancer.

But no...Coach Schnellenberger has retired to some long term facility with silver moustache combs and nurses who double as coconut oil bikini models. He's probably lounging poolside on Saturdays now while one nurse shampoos and conditions his chest hair and another adjusts the rabbit ears on the 1983 television set he bought after he beat Nebraska's punk ass in the Orange Bowl. Then rumor has it he shouted in their coach's ear at midfield - "Take that Osborne. Keep shipping that corn to Kentucky. I'll be up there eventually to drink it all."

Now the FAUx gators have some guy named Carl on the sideline. I don't know about Carl. A message bored post I read last night purports that he too has a 'stache, and once was seen next to a woman in a swimsuit. But that may have just been Bo. As in his brother, not Bo Derek who once asked Coach Schnellenberger to tango at a Key West bar but was satisfied just staring into his eyes through leafy tobacco smoke.

My internet research team spent nearly two hours finding a photo of Carl. It wouldn't have taken so long except I had told them his last name was likely Spackler. That was the only Carl I could think of that would come even remotely close to Schnellenberger on a scale of 1 to Awesome. "A Cinderella story. An unknown comes out of the pack...crowd is on its feet. He's the Cinderella boy!"

But what they found was that Carl Spackler was last seen at the base of Mount Everest with a sherpa, a half empty case homebrewed Gopher Lager and a five iron. Instead, on Sanford's north sideline will stroll some little Italian twerp that has missed his calling as a Rogaine before spokesperson. 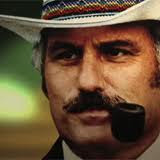 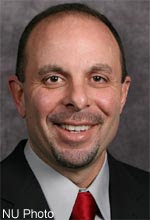 I'm no forensic pedophile investigator...but damn son. Wasn't Houston Nutt available back in December? At least Uncle Giggity pretends he's awesome in the mirror once a day. This guy...he hangs out at parks, or advertises on Craigs List for a Wednesday afternoon rest stop rendezvous. This is like Tom Selleck leaving Magnum PI and CBS deciding to replace him with Paul Reubens. I don't care if Carl Pelini is Mussolini's great-great grandnephew, or if he craps five-star outside linebackers before his morning coffee.

We had a deal! We're anointing Russ as Uga IX. Coach Awesome Sauce could've blessed the collar with fertility and maximum swagger. When we scheduled your FAUx gatuh ass we wanted a Hall of Famer, Richt's former coach, the one guy on the face of the Earth that could tell us what the hell our angel of a head coach did way back when to get suspended after his one start. What team rule did he break? Was a scooter involved? Was his dorm anywhere in the vicinity of an alley? My guess is that he shaved a goatee without Schnellenberger's permission.

Now we'll never know. The secret will die well south of Athens GA. Like Newman in a jeep. I loved Seinfeld. I hate gators. And again, owls are just feathered ones.

Now, let us bow our heads...Dear Lord, please give our inferior neighbors to the south of us the foresight to hire qualified candidates with Magnum like facial hair. And let Russ show Pitbull that a real good time actually starts at Sanford's center G. In Russ we trust! Amen.
Hunker'd Down by Bernie at 8:42 AM

I must have overlooked something!
http://www.govolsxtra.com/news/2012/sep/14/georgia-tries-to-avoid-arkansas-like-upset-vs/