I've been listening to some of y'all. Talking about rankings and "Who needs to lose so Georgia can move up?". Pretending like any of that matters way back here in September. Shut your damn piehole! Worrying about rankings and who's in front of you is for baseball fans, and B1G administrators. The only thing that matters is Atlanta in early December. And you don't get there by bitching about FSU and Oregon winning football games.

Child please. Act like you've been here before. You're embarrassing yourself, and more importantly...me.

The day Bernie, Daisy Duke and Derek met
So there I was, in all my magnificent pre-pubescence, in a gymnasium with a large group of twelve year old, awkward, wanna be hoop stars. Yet everyone was focused on just two kids. I saw guys whispering to each other and smiling. They'd dribble all the way around the foul line just to pass the ball to this dynamic duo. It was annoying at first, then it was downright obnoxious. To the point that I was robbed of at least three easy lay-ups.

WTF guys. I was open. Who're those kids anyway?
Dude, that's Coach Durham's son over there, and that's Derek freakin' Dooley with the hair and dribblin' the ball between his legs!! Awesome!
Oh. Ok. Nice crossover I guess.

And such was my introduction into unearned prestige and pre-established hierarchy. Someone can immediately, and without merit, be given a higher status based on something completely irrelevant to the setting in the first place. I could see having a pre-conceived notion that Hugh Durham's son (who's name now escapes me) would be pretty good at basketball. But this Derek kid was being treated like Dr. J and Magic all rolled into one. The coaches' whistles were useless because they couldn't unpucker their lips long enough from the kids' gym shorts.

Fast forward through a good three decades and suddenly lil Dools is being given more undeserved credit. Was he a good coach at La Tech? Sure, I guess. Those Bulldogs always seemed to remember their helmets and shit for the games that I caught on Friday nights. But worthy of an SEC perch, even one as loaded with baggage and a worthless athletic director as the one in Knoxville? Whatever. Derek's gotten more use from his last name than he has that can of Suave aerosol.

Oh wait, I think I hear all you fence sitters starting to chime up..

But Bernie...he's the son of our beloved Coach Dooley. We should support him and that family. I mean let's try and win the football game and everything, but just by a couple points maybe. Don't embarrass him, especially with his mother there. She's so nice the way she talks so incessantly and protects her young like a momma bear should. We can get along for awhile. Besides, we can root against them in other sports.

F(orget) that! Hey dumbass, lest you forget: "I never knew how good she looked in orange. All these years she's been wearing the wrong color." That's Derek, talking about his family's matriarch while in Atlanta. Look, this isn't your parents' Woodstock love-in. where they'd gather in a field, pass the J around and sing Peter, Paul and Mary tunes until their underwear disintegrated and the moon beams told them to go back to school. If Coach Dooley and Barbara wanna pull for their son, fine. I get that I guess, on some level. But I've never called Vince my daddy and Barbara ain't ever wiped my ass. If you aren't pulling for my team, you're rooting against them. The line is thin, but it's clear as day.

If one day Derek wants to repent his evil ways, I only need two things: first, take off those orange pants son. I can't tell if you're a hippie or just have a queer eye for the sideline, but that shit don't fly here. And second, the next time you see me break for the basket in my two stripe gym socks and my Dukes of Hazzard tank top, ready to go all good ol' boy on the backboard...PASS. THE. GODDAMNED. BALL!!

Of teeth, livestock and IQs
If you're thinking this is going to be one of those pieces where I make fun of Volunteer fans for wearing overalls ill-equipped to handle their body mass index and how they select their valedictorians in grade school by whoever shows up the first day of 4th grade...well yes, that's exactly what this is.

To the untrained eye, a HillBilly may appear as if they are just a gator fan with less of a tan and more Wal-Mart clothing. That and they can't seem to agree as to which shade of orange is their own. More on that in a moment. But first, exhibit A...back by popular demand...the couple that first chewed the fatback...the pair that can't ride elevators together...the husband and wife of biblical AND cylindrical proportions... 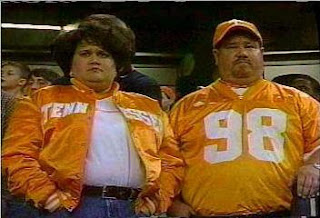 These people are best referred to as the Anti-Darwins. They don't evolve, they devolve. A study of their culture and development produces more questions than answers. Like, humans can be lawfully married to a goat? And, possum meat is higher in cholesterol than a pork shoulder?

But slowly you give up on trying to understand their mountain folk ways. The hatred burns to the surface like a fresh back tat. They're not only ignorant and stupid, they feed off their own asshatery. You can't love and adore the same coaches that you have run out of town. You can't blame a coach for wanting to leave your three ring hillbilly circus in the middle of the night through the smoke of a thousand mattresses. Hey Nathan Ray Junior Bob, you can't re-marry your sister after your brother grabbed her up off the lawn chair in the den while watching a rerun of In the Heat of the Night and took her down to City Hall in his brand new 1971 Ford pick-up.

Oh, and the Vol Navy? I mean, bless your hearts. The closest thing to an aquatic fighting force in Knoxville is your own quarterback. And there can't be that many bottles in the city. After all, Britton Colquitt was once on scholarship there. He couldn't have left but so much beer behind. So settle down Ricky Earl and Delilah Jean. Stop shaking that half eaten smoked guinea pig at me Cletus Frank and Raylene DixieAnn.

Take heart in the fact that your boys ain't quite as shitty as they were last season. Be glad there's as many Jarvis Jones on the Georgia roster as there are teeth in your sister's "pretty mouth", and that you can count that high! Don't worry about bowl games. Not when you've got all of the Saban rejects on coaching retainer! #winning!!! Please, no more fretting over the lack of dental insurance when there's still a chance DaRick Rogers could be back before the Bama game!!

And don't hate us for the beat down we'll be giving you tomorrow. Hate Mike Hamilton for having a raging case of Dooley envy. Just like those 30 UT t-shirts in your closet, none of which are the same shade of orange, you brought this on yourselves. You descended from those that ate the forbidden fatback. And in the hidden hollers and raccoon trails of Appalachia, Hell hath no greater fury.

And now, we pray. Dear Lord, please have mercy on Derek's hair and keep it combed to the correct side, even as Marlon Brown blows by him, running down the sideline towards paydirt. And help teach these mountain mongrels to respect all animals, as well as to respect each other. Even when Deliverance is playing on GranPappy's tv set.

That was fantastic. But I gotta call BS on one thing. Whoever thought Barbara Dooley was nice?