It's been a really long time since we've had the collection of talent on the offensive side of the ball that we have today. Granted, it's still a little early in their careers to be saying these freshmen are SEC ready. But I think we've seen enough so far to know that they can be something special. And without getting into the debate of whether it's the coaching or the talent that makes good teams great and great teams dominant, let's just agree that it takes a good dose of both to run the table or even make it to the SECCG. At some point in the season there is going to be moments where a player has to make a play and a coach has to make a call that has the potential to be the difference in the outcome. 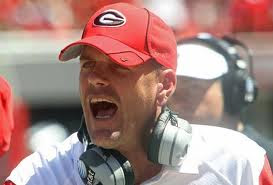 So...with that I'm just going to explain the lenses through which I'm looking at our offense.
To be clear, this is a big season for Bobo. Talk to me about the inexperience at offensive line and how many draft picks on offense we lost off last year's squad...that's garbage. There's no excuses. Bobo has to be licking his chops. With a three year starter under center, talent at running back that don't tap their helmets, good size and depth at fullback, incredible depth at wide receiver and at least one tight end that can block AND catch, our offensive coordinator has never had it so good.

* This of course hinges a lot on Murray playing the entire season and not getting injured. We'll only cross that bridge if we're forced to.
Hunker'd Down by Bernie at 7:37 AM