Final thoughts on the WLOCP 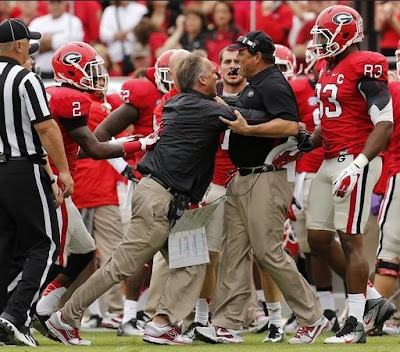 First, a pictorial essay. Taken after the head coach gave the referee more than earful following Blake Sailors bloody nosed scrum on the muffed punt late in the first quarter, this photo shows Dawg fans all they needed to know. So much going on, mainly that Richt is pushing his intensely aggravated defensive coordinator back to the sideline. Also, obscured by Grantham's somehow still perfectly placed microphone, Blake sailors is like WTF bro? My nose is a bloody mess, and not in the British way either dude! You've got Cornelius Washington coming in too, as well as Sheldon Dawson; C-Wash gave an inspiring speech before the game and Dawson KTMFO on the gators second kick return. All the while the referee is trying to decide if he should throw another flag due to the fact that Richt is clearly holding, mouthing off and playing without a helmet. (Luckily said ref was out of flags at the time and reached for nothing but a palm full of air.)

Ok...so I've re-watched the full 60 minutes of gator fail again. It was nearly as glorious in high definition Driskelian as it was in the live Muschumpian version. Sorry this is a day or more late, because I know we're ready to move towards Ole Miss. I think I'm still on St. Simons time. Regardless, here's a couple of late thoughts.

- Haven't mentioned the Zander sighting yet. This is a guy that many thought had long seen his last down as a Bulldog, and he comes off the bench to have his biggest game. With Hall hurting and Hicks back home with a concussion, this was huge.
- I know Jarvis earned every accolade (and more) he has received thus far for his performance, but my favorite play was Cornelius Washington blowing up, I mean absolutely demolishing the Florida tackle right into Driskel as he was throwing. That was the one that ended with a Swann interception. Just a terrific play from start to finish and one that encapsulates the game pretty well.
- Offensive line did a great job. Looked even better on tape than they did from the stands. Richt was right on the call in show when he half teased that they really gave Murray too much time. Hope this helps them puff out their chests a bit.
- Kudos to Murray for standing in there and delivering, especially on that 4th quarter drive. Ben puts it best here if you want a complete thought on it. But on what was shaping up to be one of his worst nights (thanks mostly to him, but also to some receivers to be perfectly fair), he delivered like a champion.
- Todd Damn Gurley. I re-watched with my 8yo. She summed up the whole game pretty well by saying "That's my boy!!" whenever Gurley carried the ball, and "That's my man!!" whenever Jarvis flexed his muscle.
- Just a really ugly game that Georgia came out of smelling like a rose. I know a lot of people are upset that the media is making this out to be a Florida loss more than a Georgia win. But truly, both teams have earned that distinction. Florida was a shell of a #2 team, and Georgia has more than earned the reputation of a team that pales under the lights. The challenge now is to go out and prove this wasn't an anomaly.

So tomorrow I'll have plenty of Ole Miss stuff up. Is it really "a trap"?
Hunker'd Down by Bernie at 6:57 AM

A lot of people missed this including myself. But the reason that Richt was so upset and restraining Grantham from making matters worse can be seen in this picture that was tweeted by Blair Walsh. https://twitter.com/BlairWalsh3/status/262294818003234816/photo/1

Yeh, that was pre-game. Would've been typical jawwing and posturing between two rivals had a staff member not gotten involved. The pic from my post is from after the muffed punt when Sailors came out of it with no helmet and a bloody nose. And of course, no flag.