Last night was Richt's first opportunity to address the South Carolina game on the call in show. This week the fans were much more critical than they were last week with the coordinators. Politely critical, but critical nonetheless.

Play calling - Conner in Lexington (young caller) says LSU had success running the power I against South Carolina’s defensive front. Should we have run more from that formation? Richt says they wished they had done that more once they went back and reflected on it after the game. It’s a downhill, between the tackles run. Can run it from the I or the one back set and the coaches feel like they didn’t give it enough of a chance. And then there were times we did run it and just didn’t block it well. But overall they think they should’ve stuck with it more. 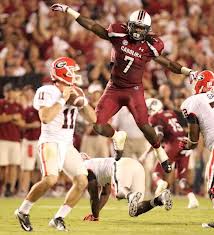 The "Big Game Fail" meme - Steven in Dalton mentions an ESPN graphic shown that points out that Georgia is 0 for their last 10 against teams that finished gthe season ranked. Would like to see the trend turn around and believes it can happen. Would just like to us execute better in the big games. Richt says we all would like that trend to turn around. Gives credit to South Carolina. Says it was an electric atmosphere and it’s our job to bring the crowd back down, but that didn’t happen. Just couldn’t make a play to stop the bleeding. Tried to get the points before the half but couldn’t get on the board and “tighten it down a little bit”. Now we’ve got to make every correction that needs to be made. Some were bad decisions by players, some were bad decisions by coaches. All the goals are intact. Practice has gone well and it starts again this weekend with Kentucky. Team has not lost heart, were disappointed. But will be ready for the rest of the season.

More play calling - Mitchell in Calhoun asks about the offensive play calling in the South Carolina and specifically if they could’ve rolled Murray out more so he wasn’t getting so much pressure. Or used a waggle to move the pocket and be able to get rid of the ball. Richt says they probably should have. They rolled Murray out one time and had a nice completion, the next time they did Murray had to throw ball a little quicker than he wanted to. They did use a lot of quick screens and “quick game”, but Clowney really impacted what they were trying to do. Used some cut blocks to try and get his hands down since he’s so tall. But yes, believes they should’ve used moved the pocket more. Agrees.

Line of scrimmage difficulties - John says it seemed like we lost some things on the line of scrimmage and wonders if the coaches saw anything on the game tape along those lines. Richt starts with the offensive line and says we did not protect the edges very well. Didn’t lose every battle, but couldn’t contain their pass rush when we needed to. Should’ve tested between their tackles more. Says this is with the benefit of hindsight, not criticizing Bobo. As for the defensive front there was the added responsibility of controlling the quarterback’s containment. Says it had to be a “controlled rush”. And we didn’t do that well enough. Moving forward we believe in our guys up front. Have to stick with the running game a little more and not give up the big plays on defense.

And more play calling - David in Cumming asks if there’s any possibility Richt would take over the play calling again and Bobo would just concentrate on the quarterbacks. Richt says whoever is calling plays is going to be criticized, just as he was at FSU and at Georgia. He believes in Coach Bobo. Says he does a great job. Before the South Carolina game no one was even thinking about that as the offense was on a record breaking pace. That doesn’t happen by accident. The last game there wasn’t much offensive production, it was frustrating. But it was one game. He’s doing a very good job and we’re all lucky to have him.

All in all a good show. Hope you were able to catch it. If not, here's the transcript. The general theme was that they got whipped as a team but aren't hanging their heads. Onto beating Kentucky!
Hunker'd Down by Bernie at 6:49 AM

I have always been and still am a MR supporter. He is certainly a man I would like to coach my son. In the world of college football, especially in the SEC however, to be a serious contender you have to be able to win big games, on the largest of stages. It seems, for whatever reason, UGA cannot rise to the occasion. Folks talk about poor coaching, not enough big time players across the board, a sense of entitlement on the part of a few of UGA's players, etc. I guess I have bought into all of those reasons/excuses at one time or another. At times, I simply do not understand the performance of UGA such as the South Carolina loss and the 2nd have of the 2011 SEC Championship game. It is very frustrating to be a UGA fan and watch a game where we never bothered to show up. I will never be one of the lynch mob trying to get rid of CMR. I expect the AD will make that call when and if he feels the time has come. I really do fell that CMR needs to put together a string of big wins against quality opponents if he is to survive in the savage SEC. I expect UGA to beat Kentucky (needs to be a sound whipping). Then, they have to travel to Jacksonville and do something I expect not many expect to happen at this point: BEAT FLORIDA!