The common era of football in Jacksonville hasn't been kind at all to the Georgia Bulldogs. Ever since Spurrier took his evil genius from Tobacco Road to the swamps of Florida victories in Jacksonville have been as rare as a mud puddle in the Mojave. So...why? Why can't we compete with Florida anymore with any consistency?


Yesterday I pointed out that the 1966 and 1976 contests were two games that Florida should've won but failed to. Then I asked if that sounded familiar. I did that because it should sound very, very familiar.


1993: Soggy Timeout
After withstanding the ridicule of Spurrier for a couple years, Goff seemed to have the Gators beat in 1993. But Zeier's touchdown pass to Jerman with 1 tick left was waved off by a timeout.

And keep an eye on Spurrier's defensive coordinator in this video, he returns to haunt us more...here....


2002: gettin' Zook'd
This was the season we were finishing the drill, knocking the lid off the program. Richt's team was on their way to the SEC Championship game for the first time and the Sugar Bowl. We went into Jacksonville with an unblemished 8-0 record and the Gators came in at 5-3. To set the stage in three simple words: Spurrier was gone.


But after starting the season owning the entire state of South Carolina...and after going to the trouble of proving we were "man enough" in Tuscaloosa...then completely obliterating two lesser opponents leading up to the trip to Jacksonville...Zooker's squad grew more and more confident as the game went on. The end result was a 20-13 loss.


Nothing worked that had all season. The Shockley experiment was a complete momentum killer and not the change of pace, keep them off kilter plan that had been working pretty well most of the season. The defense played tough, forcing punts and field goals until late in the game when Rex Grossman finally connected on a TD pass that ended up being the difference. 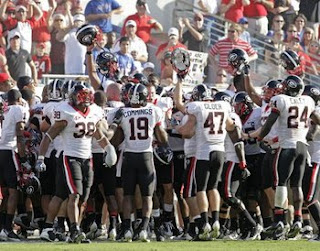 
In all honesty, this post should be about ten times as long. There was the Half and Hundred 'Tween the Hedges...the 2008 Revenge game...dropped passes...missed blocks...Shockley's knee giving way to Joe T3...and plenty of heartache to go around. I am just not physically or emotional able to relive the last two decades in their absolute misery.