We've discussed before the fact that Mark Richt is as polarizing a figure as there has ever been in University of Georgia athletics. So you're either going to read this as him lagging behind his contemporaries, or you're going to read it as another great article on a great man. 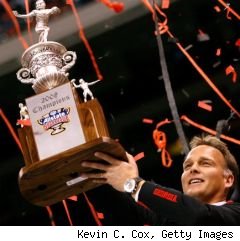 I get all that. It makes me proud of our coach and proud of my alma mater. And yet I still see other programs running by. I'm as patient as they come and I believe in staying the course more than gut reactions. But the fact remains that we're still waiting...

I also realize it's not all about the head coach. There are plenty of other reasons programs in close proximity have earned their crystal ball ahead of the Georgia Bulldogs. So in that sense, Wetzel's article only scratches the surface.

But it all still begs the question: Will Georgia's nice guy ever finish first?
Hunker'd Down by Bernie at 7:02 AM

Truth. Won't happen with him at the helm. Glad things in Jax are turning around it appears. And nothing against him personally, but just not enough ther to go all the way.

You guys are really exhausting - and embarrassing. I'm glad CMR says in this article "apologize for WHAT?". You think because he's relaxed and kind you can just trash him because he never calls our fans out on it. He's like 135-39 or something in his career at Georgia, is about to take the team to its 5th SEC championship game in 12 or so years, and we're #5 in the country, and have just barely missed the NC game several times. Look at the record of every other Georgia coach - he's the best there has ever been, and the only reason you have room to complain is because CMR himself set the standard for excellence you compare him to.