To call his rant on the defense post-Kentucky a season saving moment might be a bit of a stretch. But there's no doubt it was a catalytic moment for the fans and more importantly the team. 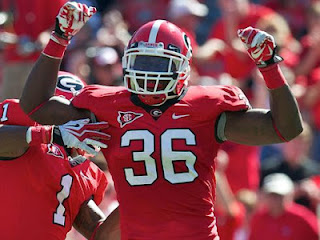 Before Georgia’s 17-9 win against Florida, the senior now famously called out Georgia’s defense as “soft” and said the Bulldogs were playing without emotion.
Georgia has given up an average of 8.3 points and 263.8 total yards per game in the four games since then against the Gators, Ole Miss, Auburn and Georgia Southern.
“I think Shawn’s comments certainly had a great effect on our football team,” coach Marl Richt said on his radio show tonight. “It jolted everybody a little bit. It got some guys mad, it got some guys hurt, their feelings got hurt a little bit. I think everybody understood Shawn’s motivation was to get everybody to play they are supposed to play.”
Williams doesn’t think he should be credited for saving the season, but he said he’s seeing his teammates now giving it their all and playing “really good” now.
“I wouldn’t call it saving the season,” Williams said in his first public comments since his rant. “I just always knew we could do it. We just had to go out and do it.”

And by the way...I won't need a plaque commemorating the moment to remember it.
Hunker'd Down by Bernie at 5:41 AM