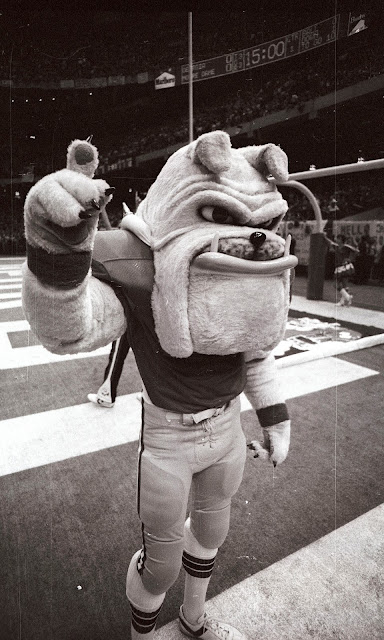 Hairy Dawg is currently one of the most recognizable college football mascots in the country.  He made his first Georgia Football appearance during the 1981 Sugar Bowl for the 1980 National Championship Game. Coach Vince Dooley saw sketches of Hairy, presented by the designer, Tom Sapp.  He liked the sketches and wanted the new mascot to make his first appearance at the Sugar Bowl game. "It was designed to be a more intimidating look than our previous mascot." he said.  Tom got to work right away and created the new mascot in a short 3 weeks, cutting and stitching it himself.  UGA student, Stan Beecham, wore the first Hairy Dawg costume.  Hairy was a big hit among Bulldog fans!  The Bulldogs went on to beat the Irish and became the national football champions.


From the folks who created "1980 Dawgs - The Inside Story of the National Championship Season". Which, by the way,  is incredible look back at that amazing season, with many stories that haven't been told before.  "1980 Dawgs"  would make a great stocking stuffer for that favorite Dawg fan in your life.  You can order here:  www.1980Dawgs.com
(via Mike Moss, exec. producer; photo:  Wingate Downs)